Nicolas Maduro announced the expulsion of the top US diplomat in Venezuela and two other embassy employees for allegedly conspiring with "the extreme right" to sabotage the economy. 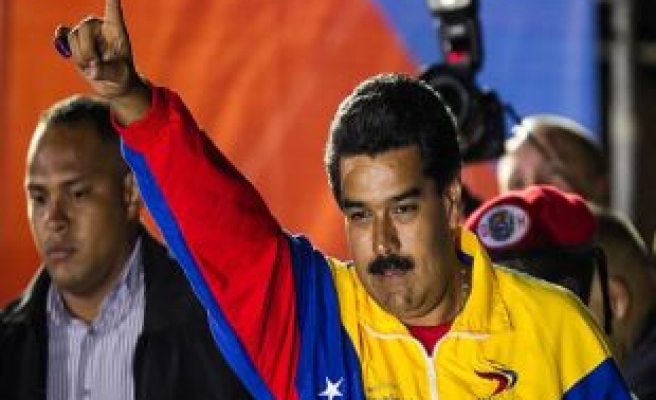 Venezuelan President Nicolas Maduro said on Monday he was expelling the top U.S. diplomat in the South American nation and two others, accusing them of meeting with opposition leaders and encouraging "acts of sabotage" against his country.

It was the latest of several public disputes between the socialist leader and the United States since Maduro won an April election following the death of his mentor and predecessor Hugo Chavez.

Maduro said Venezuelan authorities had for months followed the three U.S. diplomats, and that he had now given them 48 hours to leave the OPEC member country.

"We detected a group of U.S. embassy officials dedicated to meeting the far-right and to financing and encouraging acts of sabotage against the electrical system and Venezuela's economy," the president said in a televised speech.

"I have the proof here in my hands," Maduro added. "... Yankees go home! Get out of Venezuela! Get out of here! I don't care what actions the government of Barack Obama takes."

He said Venezuela was expelling Kelly Keiderling, who as U.S. chargé d'affaires is the senior American diplomat in Venezuela because the United States has no ambassador to the country. According to a U.S. Embassy website, she has been assigned to Caracas since July 2011 as deputy chief of mission, and was temporarily serving as the charge d'affaires.

Venezuela identified the other two diplomats as Elizabeth Hunderland and David Mutt. The U.S. Embassyhad no immediate comment or confirmation regarding the expulsions.

"I'm not going to allow any action that stirs violence in this country," Maduro added.

Responding to the expulsion of the three U.S. diplomats, opposition leader Henrique Capriles said no one believed the "joke alerts" being issued by Maduro's team.

"It's just smoke to cover up that they can't manage the country!" Capriles, who contested the election result after losing to Maduro in April, said on Twitter.

Six months ago, Maduro expelled two U.S. military attaches hours before announcing Chavez's death from cancer, later saying that one of them was trying to stir up a coup against Chavez.

Maduro has also suggested Chavez's illness could have been caused by his enemies, including theUnited States. The United States and others called that allegation absurd.

Since then, the president has loudly denounced a U.S.-led "economic war" that has led to product shortages and blackouts.