﻿Venezuela opposition leader due in court

Venezuela opposition leader Leopoldo López is due to appear in a hearing before the country's Justice on Wednesday after handing himself in on Tuesday. 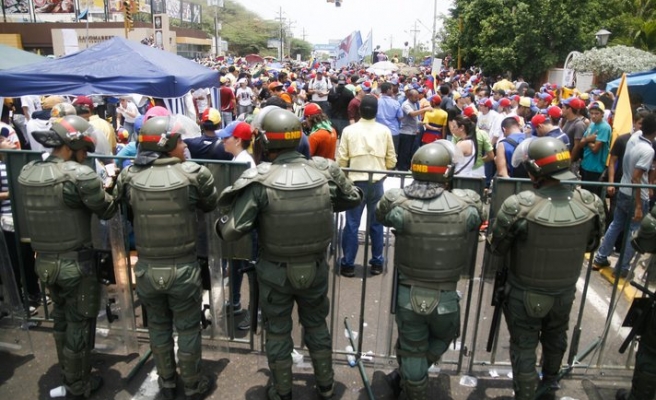 One of Venezuela's main opposition leaders, Leopoldo López is due at a court hearing on Wednesday to answer charges of inciting violence after handing himself in on Tuesday and spending a night in a military prison.

López, who is the leader of the opposition Voluntad Popular (Popular Will) party, faces a string of charges, including premeditated murder, terrorism and arson, for his part in student protests on February 12, where three people were shot dead.

He denies all of the charges which he has dismissed as politically motivated.

Ahead of the hearing, dozens of supporters gathered outside the Palace of Justice in central Caracas, but were reportedly displaced by supporters of President Nicolás Maduro.

The opposition leader's wife, Lilian Tintori de López, urged his supporters to join her at the Palace of Justice for his hearing on Wednesday.

Speaking to CNN en Español, Mrs. López said her husband had urged her “not to forget that he is being arrested for things that he has asked for: the freeing of political prisoners, the freeing of students, an end to oppression, an end to violence”.

Prosecutors will decide at Wednesday's hearing whether to charge or free the opposition leader. López might also be remanded in custody for up to 45 days to give prosecutors time to investigate and then decide whether to proceed with charges or release him, according to BBC Mundo.

Reports say five people have been killed in the unrest so far – four of them allegedly from the opposition.

The latest victim, Genesis Carmona, reportedly died on Wednesday after being shot at anti-government protests in the state of Carabobo on Tuesday. Carmona, a beauty queen famous throughout the country, actively supported the opposition.

López was arrested on Tuesday after handing himself in to the National Guard who were policing the opposition rally.

A pre-recorded video featuring López later appeared on YouTube, in which he said he did not “regret any of the things" he has done, and reiterated that charges against him and his detention were “unjust” and were because he was “dreaming of a better Venezuela”.

“If you are watching this video it is because another abuse has been carried out by the government, which is seeking to spread lies and distort and manipulate events.”

Earlier on Tuesday he called on his supporters -dressed in white- to rally in central Caracas against the government; Maduro supporters -wearing red- also rallied.

The authorities issued an arrest warrant for Mr. López last week. The opposition leader then went into hiding briefly, but posted a video message on Sunday calling for Tuesday's mass anti-government rally where he reappeared in public to denounce the government and the charges against him, and peacefully hand himself in.

Thousands of opposition supporters had gathered, and witnessed the opposition leader being taken from the scene in an armored vehicle.

Human rights organizations have accused the Venezuelan government of attempting to silence popular dissent in the country.

“[The] Venezuelan authorities must either present solid evidence to substantiate the charges against López or release him immediately and unconditionally,” said Guadalupe Marengo, Amnesty International Americas Program Deputy Director, adding that the charges “appear to be politically motivated” and were “an affront to justice and free assembly”.

The wave of anti-government protests in Venezuela is the biggest test so far for Nicolás Maduro's presidency. He took office in April 2013 after the death of his predecessor Hugo Chávez.

Protester demands include a reduction in crime, freedom of speech, and access to a number of staple products.