At least six people have died, five from gunshots, and one run over by a vehicle, as the protests have degenerated into violence in Caracas and other cities around Venezuela 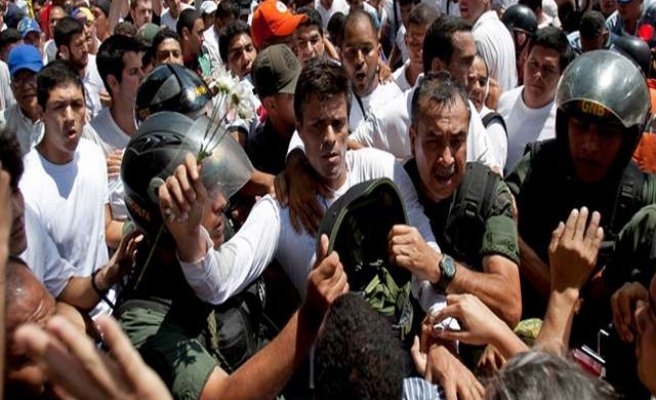 "I'm fine, I ask you not to give up, I won't," Leopoldo Lopez said to his followers in a handwritten note passed to his wife at Caracas' Ramo Verde prison then posted on the Internet.

The 42-year-old Lopez, a Harvard-educated economist and one of the few surviving relatives of Venezuelan independence hero Simon Bolivar, spearheaded protests against the socialist government that began at the start of February.

He surrendered to the military this week after an arrest warrant was issued accusing him of instigating the violence.

At least six people have died, five from gunshots, and one run over by a vehicle, as the protests have degenerated into violence in Caracas and other cities around Venezuela, especially in the western Andean region.

The government puts the death toll at eight, including indirectly linked cases of a woman who had a heart attack and a judicial official who crashed his car while swerving round a barricade.

Some 100 civilians have also been injured, and 37 members of the security forces, authorities say.

Both sides are blaming each other for murder and brutality.

The government says sharpshooters are appearing on the opposition side and radicals are seeking to create chaos by smashing property, attacking police and blocking highways.

The protesters, mainly students, accuse Maduro of worsening repression. They say police are firing shots, allowing pro-government gangs to attack the protesters and mistreating some detainees.

"To the police, soldiers, prosecutors and judges: do not obey unjust orders, do not become the face of repression," Lopez said in his note from prison.

"To the youth, to the protesters, I ask you to stay firm against violence, and to stay organized and disciplined. This is everyone's struggle."

Having initially accused Lopez of crimes including murder and terrorism, authorities are now charging him on lesser counts of instigating arson, damage and criminal gatherings.

Once again, the worst trouble on Friday appeared to be in the western border town of San Cristobal, which residents are calling a "war zone" with running battles between students and security forces on barricaded streets for days.

Venezuela's military has moved into the town in force, residents say, with helicopters and planes flying overhead. Interior Minister Miguel Rodriguez Torres is personally leading the operation there.

There was also trouble in Merida, another Andean town, and protesters blocked a few streets again in Caracas on Friday.

In the biggest challenge to Maduro's 10-month-old government, the protesters are demanding his resignation over Venezuela's rampant crime, inflation, shortages of basic products and alleged repression of opponents.

Demonstrators bang pots and pans from windows every night.

"I recommend they buy some stainless steel pots to last for a good 10, 20, 30 or 40 years," Maduro mocked them late on Thursday. "Because the revolution is here for a long time!"

Maduro says the protests are a pretext for a planned coup, similar to the short-lived ouster of his predecessor, Hugo Chavez, in 2002. There is no evidence the military, which was the decisive factor in 2002, may turn on Maduro now.

The president's petroleum minister, Rafael Ramirez, warned that fuel supplies to "zones under fascist attack" could be suspended in order to preserve citizens' security.

Henrique Capriles, an opposition leader who has a more moderate line than Lopez, mocked the claim that protesters were planning to overthrow the government through force. "Civilians don't carry out coups, it's the military who do coups."

Maduro, a 51-year-old former bus driver and union activist, won the presidential election last April. About nine people, most of them government supporters, were killed then in post-election violence when the opposition disputed the result.

The nation of 29 million people is split down the middle between "Chavistas", as Maduro's supporters are still known after their idol who died of cancer last year, and opponents.

Given Venezuela's leadership of a Latin American leftist alliance from Cuba to Bolivia, and the fact it has the world's largest oil reserves, the international ramifications are big.

The unrest "threatens to further erode stability and human rights in an already polarized nation facing acute economic crisis and where the homicide rate is one of the highest on Earth," the International Crisis Group think-tank said in the latest expression of concern over Venezuela from abroad.

Local TV channels are providing almost no live coverage of the unrest, so Venezuelans are turning to social media to swap information and images. Falsified photos are also circulating.

While the Caracas protests began in middle-class neighborhoods and are still strongest there, sporadic demonstrations have also spread to poorer areas.

Venezuela's authorities revoked Friday work permits of two CNN staff in the country after President Nicolas Maduro threatened to expel the U.S. news network, and block access to the channel over its coverage of violent protests.

CNN presenter Patricia Janiot, her producer and CNN correspondent Rafael Romo have had their Venezuela work permits revoked, according to the SNTP - the Press Workers' Union.

"@PatriciaJaniot's untimely departure from Venezuela confirmed, after pressure and threats from [President] Maduro against CNN," the SNTP said in a post on Twitter.

According to the BBC's Mundo, CNN said in a statement that it would 'carry on reporting both side of the tense situation in Venezuela.'

Speaking on Thursday night, Maduro said he would block the channel if it continued broadcasting "war propaganda."

"I have asked the [Communications] Minister Delcy Rodríguez to notify CNN that an administrative process has been initiated to remove them from Venezuela if they do not change this," the president said in a televised national address.

"They are airing war programs 24 hours a day. They want to show the world that there is civil war in Venezuela. I won't accept war propaganda against Venezuela. If they don't rectify themselves, out of Venezuela, CNN, out," he said.

Maduro ordered Colombian news channel NTN24 to be taken off the air last week, accusing it of trying to create conflict among Venezuelans.

Local media in Venezuela is largely under government control; the only independent TV channel was bought by a businessman close to President Maduro last year.