At least 41 people have died, and nearly 800 injured, in violence around the protests that brought the South American OPEC nation's worst unrest in a decade. 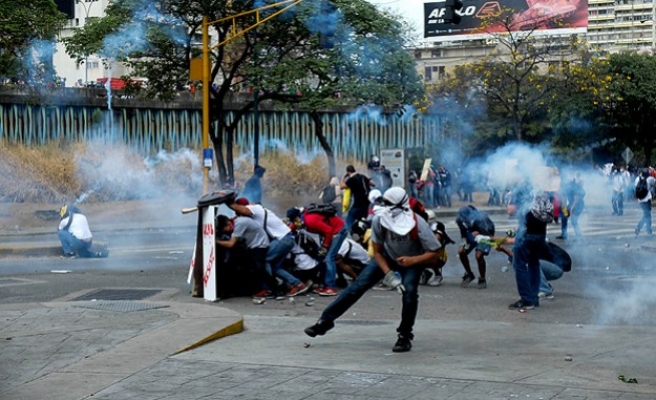 Venezuela said on Friday that 58 foreigners had been arrested on suspicion of inciting anti-government protests and violence that have rocked the South American for the last three months.

Interior Minister Miguel Rodriguez Torres told a news conference that Colombians, an American, a Spaniard and an Arab were among the scores of "mercenaries" rounded up before and during demonstrations against the socialist government.

At least 41 people have died, and nearly 800 injured, in violence around the protests that brought the South American OPEC nation's worst unrest in a decade.

"Up to now, there are 58 detainees of other nationalities, almost all implicated in the use of arms," he said, showing reporters numerous flow-charts and photos of alleged meetings, phone calls and plotting.

The U.S. citizen, detained in Tachira state, had been previously identified as Todd Michael Leininger, and is accused of arms trafficking and attempted murder.

President Nicolas Maduro, who seems to have faced down the worst of the protests, alleges his opponents were planning a coup against him, with the connivance of the United States, like the brief toppling of his predecessor Hugo Chavez in 2002.

Rodriguez accused right-wing U.S. politicians and former Colombian president Alvaro Uribe of being involved in a meticulous plan to spark the unrest and bring down Maduro with the involvement of the U.S. government.

"The protests were not spontaneous," he said.

"Venezuela is, without doubt, living through a plan of insurrectional conspiracy with clear aims of toppling the legitimately-established government, and that plan is part of a permanent strategic objective of the U.S. State Department."

Opposition protesters hotly deny accusations of coup intentions or foreign interference, saying the protests were born out of frustration with authoritarian practices by the state and Venezuela's severe economic problems.

The U.S. government, Uribe and others repeatedly named by Venezuela have denied involvement, saying Maduro is trying to create a smokescreen to cover domestic problems.

Alfredo Romero, who runs a local human rights organization tracking arrests during the crisis, said his group only knew of a few arrests of foreigners linked to the recent violence.

Various detainees had double nationality, he said, which could be causing confusion.

According to the government's most recent figures, 197 people remain behind bars, of more than 2,000 arrested since protests began in early February. Rodriguez did not clarify if all the 58 foreigners he mentioned were still in prison.

Marches and roadblocks are continuing sporadically across the country, though numbers have dropped and clashes are infrequent. For weeks during the crisis, hooded protesters battled security forces daily in Caracas and other cities.

Maduro, who won election to replace Chavez last year after his mentor died of cancer, appears to have kept the crucial support of the armed forces behind him.

After ballot defeats to Maduro in 2013 and Chavez in 2012, hardline opponents had been hoping to provoke a "Venezuelan Spring" this year.

Though they failed to bring millions onto the streets or end Maduro's rule, their actions did draw international attention to Venezuelans' hardships, including the highest inflation in the Americas and scarcity of basics from milk to flour.