Beset by one of the world's highest murder rates, Venezuela has set a two-year deadline to clean up its police forces, an official said. 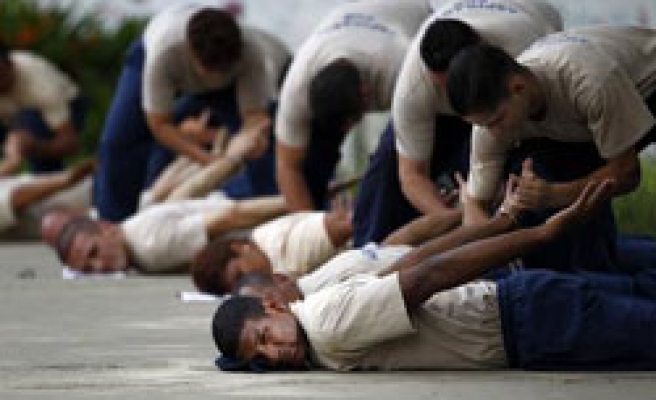 Beset by one of the world's highest murder rates, Venezuela has set a two-year deadline to clean up its police forces, an official said on Thursday.

Soraya El Achkar, who heads the government body in charge of creating a National Police force, said the South American nation's city and state police forces had been given strict new guidelines on weapons and training.

"We are moving from a repressive to a preventitive model of policing," said El Achkar, a human rights activist who defends victims of police brutality.

"The police forces have two years to reform."

If police forces do not meet new requirements such as clear gun identification and more street patrols before the deadline, they may disappear, El Achkar said.

Between 13,000 and 16,000 people were killed last year, according to leaked police numbers and a nongovernmental watchdog, respectively.

On Thursday, 100 members of the Primero Justicia opposition party lay under red-stained sheets with cardboard "gravestones" outside a government human rights office to protest the number of homicides.

"We want a country with peace, with justice, tranquillity and order," said party chief Julio Borges, who is seeking a seat in parliament and wants to pass a law to take millions of illegal weapons off the streets.

The government counters that its shake-up of policing is already bearing fruit, saying a pilot project of the National Police had slashed murder and other crime levels by more than half in Catia, one of Caracas' most violent slums.

Speaking at a newly founded police university, El Achkar said the National Police would be extended to 10 crime hot spots across Venezuela and be the main body policing Caracas by the end of 2011.

One in five crimes in Venezuela is committed by the police themselves, according to the Interior Ministry. There are now 138 municipal and state police forces, many inadequately equipped or trained and accused of corruption.

Policing functions at a national level are currently carried out by the National Guard unit of the army and an investigative police force.

The creation of the National Police has been planned for years and got off the ground in December with the Catia pilot.

There are about 2,300 agents operating in the district, trained in community policing based on the Police Service of Northern Ireland and Nicaragua's National Police, with a focus on community relations and controlled use of force.