Chavez is expected to keep control of the National Assembly in a poll testing his support ahead of a presidential ballot in 2012. 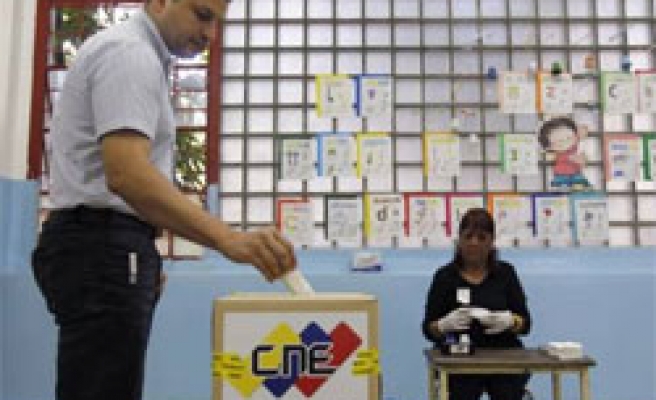 Venezuelans vote in a parliamentary election on Sunday with President Hugo Chavez expected to keep control of the National Assembly in a poll testing his support ahead of a presidential ballot in 2012.

More than 17 million people are eligible to take part in the vote, two years before presidential polls in the oil-rich South American nation.

The focus is on whether the opposition can take more than a third of the 165 seats up for grabs, which would mean the socialist leader would need support from his foes for major changes to laws or to make appointments to important institutions.

Chavez is not on the ballot but his larger-than-life personality has dominated the campaigns -- and exposed sharp political differences in a country with a huge gap between rich and poor, despite its vast oil and mineral wealth.

"The opposition are very confident this time but they do not understand how the people feel," said Carlos Cristiani, 44, wearing a Chavez T-shirt and selling newspapers in Sebucan, one of the capital Caracas's most affluent neighbourhoods.

"Chavez has problems, that's clear, but nobody wants these other (opposition) people. They will be very disappointed."

In addition to the 56-year-old former paratrooper's personality, the peaceful campaign has focussed on Venezuela's shocking crime statistics and its economic woes. A second year of recession has been worsened by high inflation.

Chavez, in a televised broadcast, spoke out against opposition leaders.

"They will never come back here," he said from the Miraflores presidential palace. "They will never enter here again, the immoral ones, the mobsters, the state-less ones, the traitors. I am going to say this until the last day of my life."

According to polls, the Socialists are a couple of percentage points ahead of a newly united opposition umbrella group, Democratic Unity. Combined with changes to voting rules and the electoral map that favour the government, analysts say that means Chavez's party enters the vote as favourite.

Opponents, however, say there is a wave of disenchantment with the president that will prove the polls wrong.

"We need to get rid of this crazy guy right now," said housewife Valeria Mendes, 37, walking with pro-opposition friends on the Avila mountain that towers above Caracas. "We've put up with him for too long. He's ruining our country."

Investors will be paying close attention to the outcome, particularly because debt issued by the government and state oil company PDVSA offers very high yields for those willing to bear what some consider a significant chance of default.

One factor out of all the contenders' control is fierce rain that lashed much of the country on Friday, triggering a flash flood that killed a family of seven living in a hillside slum in the capital. The weather improved on Saturday but turnout could be affected if the heavy downpours resume.