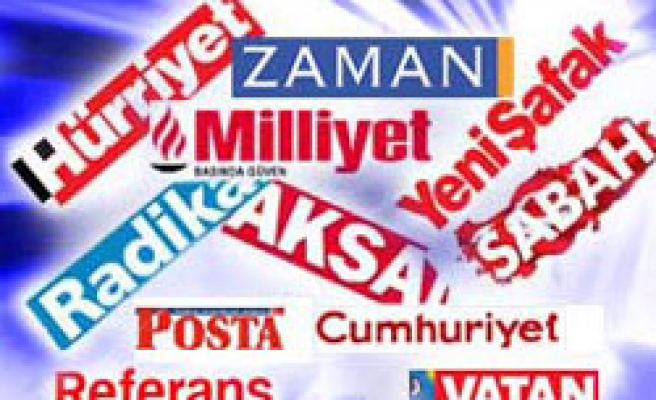 "Good start," was MILLIYET's headline. The paper said the two leaders agreed that talks would be on the basis of mutually-shared principles in an environment of confidence building.

"The meeting was conducted in a sincere and friendly atmosphere," the paper quoted Davutoglu as saying.

STAR pointed to "goodwill" shown by both sides and said both Davutoglu’s Justice and Development (AK) Party and the CHP underlined that Turkey must stand united with a strong government profile.

Davutoglu, however, clarified that his first talks with Kilicdaroglu were to build "correct understanding”, SABAH reported.

The paper underlined "mutual confidence" between the leaders and their desire for a strong government.

HABER TURK covered some "important" details about the 100-minute meeting. The premier did not go to the meeting in his official car, giving a message that "I came here as a party leader, not the prime minister," the paper wrote.

In a gesture, Davutoglu and Kilicdaroglu also shared special Turkish bagels ahead of the Islamic holy night of Laylat al-Qadr.

The CHP, in return, did not bring up the issue of President Erdogan's standing back from front-line politics, CUMHURIYET wrote.

The opposition parties object to Erdogan's active role in politics. Erdogan, however, has repeatedly said he would not be a symbolic president.

During this first official coalition talks between the two parties, both were "optimistic but prudent," VATAN wrote.

Further coalition talks between the AK Party and the CHP will be conducted by party representatives Omer Celik, minister of culture and tourism, and Haluk Koc, CHP party spokesman and deputy chairman, AKSAM reported.

"16 years later" was YENI SAFAK's headline, which said Monday's coalition talks are the first in 16 years, after the Democratic Left Party of late premier Bulent Ecevit failed to win a majority in the 1999 general election and had to make a coalition with the Nationalist Movement Party (MHP) and the center-right Motherland Party.

If no coalition appears at the end of 40 days, the country will have to hold an early election, most likely in the second half of November.

In other news, Turkish dailies also reported that the country’s top court had annulled a law which would have closed all private tutoring centers, or ‘dershane’ in Turkish, by September 1, 2015.

The court's decision came as a shock, as it was only 45 days until the law was due to come into force.

The CHP had appealed to the Constitutional Court last year claiming that the closure of such educational centers was "unconstitutional".

Monday’s court ruling said that closing the institutions had been a violation of the "right to education," "right to enterprise," and "freedom of labor," HURRIYET reported. The decision is final and cannot be amended.

Now, the issue is what will happen to over 2,000 centers which have already closed down following the government's determination on the law, HABER TURK said.

YENI SAFAK claimed the court's decision would serve the centers of the ‘parallel state’.

A substantial number of those educational centers are linked to U.S.-based Islamic preacher Fethullah Gulen's ‘Hizmet’ group, which is accused by the government of infiltrating key state institutions and of forming an illegal ‘parallel state’.

In economic news, financial newspaper DUNYA ran a story on its front page claiming that Turkey was being threatened by a potential loss of tourism revenue this year. It reports that all the country’s main tourism bodies are expecting a decrease in the sector.