1 in 3 Syrian children know nothing but war

'Every Syrian child under the age of five has known nothing but a lifetime shaped by war – that's an estimated 2.9 million children inside Syria and at least 811,000 in neighbouring countries,' UNICEF says 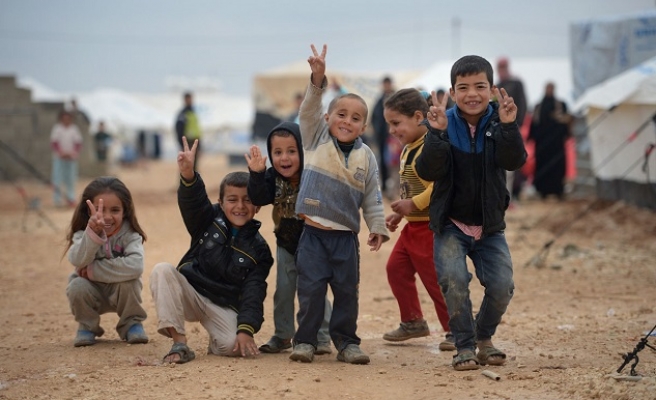 One in three Syrian children have known nothing but a lifetime of war, UNICEF said Monday, as the country's conflict enters its sixth year this week.

Forced from their homes and schools, orphaned by violence and drafted into work or fighting, a generation of Syria's children is being shaped by the conflict, UNICEF said in a new report.

"Every Syrian child under the age of five has known nothing but a lifetime shaped by war – that's an estimated 2.9 million children inside Syria and at least 811,000 in neighbouring countries," the UN children's agency said.

Syria's war has killed more than 270,000 people and, according to the United Nations, forced more than half of a pre-conflict population of 23 million from their homes.

"Five years into the war, millions of children have grown up too fast and way ahead of their time," said Peter Salama, UNICEF's regional director for the Middle East and North Africa.

"As the war continues, children are fighting an adult war, they are continuing to drop out of school, and many are forced into labour, while girls are marrying early," Salama said.

Inside Syria, "nearly seven million children live in poverty, making their childhood one of loss and deprivation," Salama said.

More than 200,000 children live in areas of Syria under siege, the report said.

At least 2.1 million children inside the country -- and 700,000 in neighbouring countries -- are out of school, UNICEF said.

And "a trend of particular concern is the increase in child recruitment" by armed forces and groups, the report said.

"Children report being actively encouraged to join the war by parties to the conflict offering gifts and 'salaries' of up to $400 a month," it said.

Since 2014, recruited children are much younger than in earlier years -- some as young as seven -- and often without parental consent, it said.

More than half of the UNICEF-verified cases of such recruitment last year involved children under 15 years old, compared with less than 20 percent in 2014.

"These children are receiving military training and participating in combat, or taking up life-threatening roles at the battle front, including carrying and maintaining weapons, manning checkpoints, and treating and evacuating war wounded," UNICEF said.

"Parties to the conflict are using children to kill, including as executioners or snipers," it said.