One Egyptian was killed and 67 others injured in clashes between supporters and opponents of ousted President Mohamed Morsi late Tuesday in three cities, medical and security sources said. 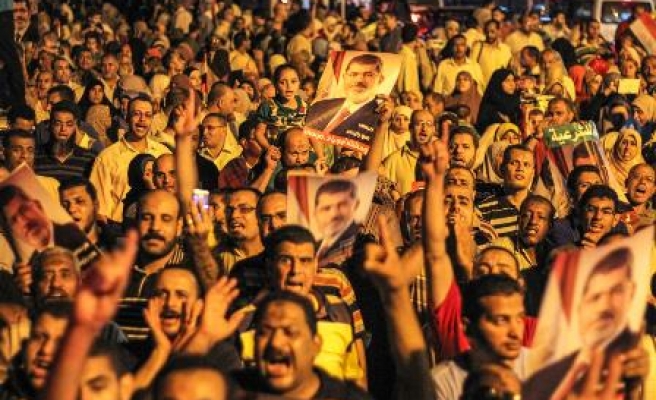 One Egyptian was killed and 67 others injured in clashes between supporters and opponents of ousted President Mohamed Morsi late Tuesday in three cities, medical and security sources said.

The Mediterranean city of Alexandria saw the worst of the latest bout of violence in the country which was engulfed in political turmoil since the July 3 overthrow of the Islamist leader.

"At least one person was shot dead and at least 40 others were injured," Ossama Abo al-Saud, head of the local Amiri Hospital told Anadolu Agency late Tuesday.

The violence erupted between pro- and anti-Morsi protesters when the supporters of the deposed leader were gathering to stage a march near the Qaid Ibrahim Mosque in Alexandria, the site of an ongoing pro-Morsi sit-in.

The two sides hurled stones and bottles at each other amid a lack of police presence, eyewitnesses said.

In the Nile Delta governorate of Beheira, at least 20 people were wounded in similar clashes in Etay al-Baroud town, about 110 km northwest of Cairo.

In the northeast, seven people were injured when protesters in a march demanding Morsi's reinstatement were involved in scuffles with opponents in the canal city of Ismailia.

The clashes broke out when a march of pro-Morsi protesters was "attacked by thugs with bladed weapons and birdshot guns," Ali Abdellah, a spokesman for the Muslim Brotherhood in the governorate, told Anadolu Agency.

Morsi, Egypt's first democratically elected president, was removed from power by the powerful army last month after mass demonstrations against his regime.

Ever since, thousands of his supporters have been staging daily demonstrations and sit-ins to defend his "democratic legitimacy" and demand his reinstatement.