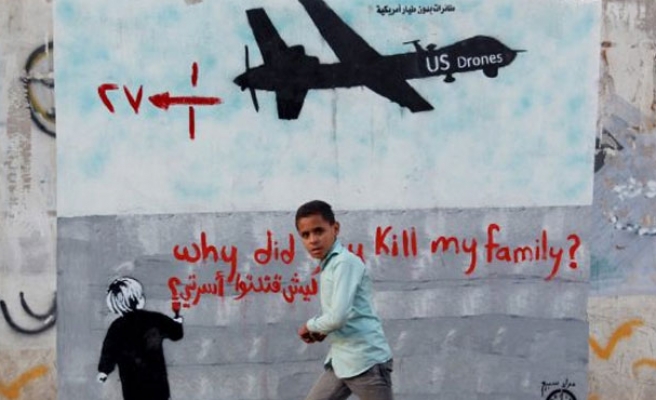 A Yemeni rights group said on Tuesday a sixth grade student aged about 12 was killed in a U.S. drone strike east of the capital Sanaa, an assertion that could raise fresh concern over Washington's campaign against suspected militants.

The group said Mohammed Saleh Qayed Taeiman was one of three people reported killed in Monday's drone strike. It said his father and older brother were killed in a 2011 drone strike, and a third brother was wounded in another drone attack.

Yemeni officials said on Monday that three men believed to be al Qaeda militants were killed in a car travelling in the Hareeb region of Marib province, the first drone strike since U.S.-backed President Abd-Rabbu Mansour Hadi and his government quit last Thursday.

The United States acknowledges using drones to combat Al Qaeda in the Arabian Peninsula (AQAP) in Yemen but does not comment publicly on attacks.

But the Yemeni National Organisation for Drone Victims (NODV) described him as "a normal kid".

"He was in sixth grade, so his age was between about 11-13 years old," NODV head Mohammed al-Qawli told Reuters, adding that Taeiman was recently treated at a Yemeni government military hospital in Sanaa after he was kicked by a camel.

NODV said that Taeiman's 65-year-old father, Saleh Qayed Taeiman, died along with one of his sons called Jalal, 16, in the 2011 drone strike. A third brother, 17-year-old Ezz el-Deen, survived another drone strike, but still has shrapnel in his body, NODV said.

NODV said that one of the other victims in Monday's strike was identified as Abdallah Khaled Aziz al-Zindani, a farm worker married to a woman from the Taeiman clan, which was due to meet with other tribes in the area to discuss their response.