Broad Syria peace talks get under way in Vienna 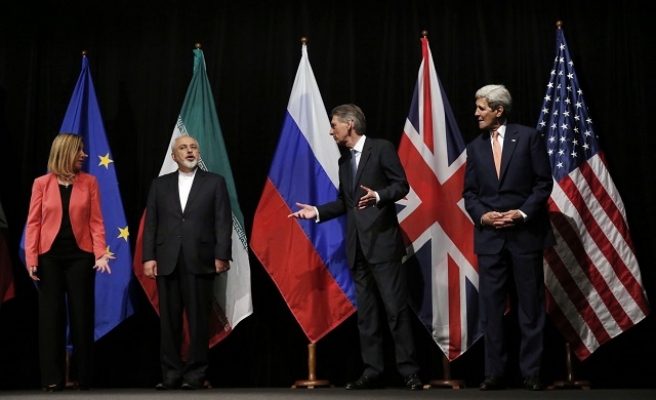 Top diplomats from 17 countries, as well as the United Nations and the European Union, gathered in Vienna for talks bringing together all the main outside players in the four-year-old Syrian crisis.

The meeting is seen as a crucial first step in seeking a political path out of the conflict and resolving deep divisions over the fate of President Bashar al-Assad.

In a sign of its growing diplomatic clout, Iran, a longtime sponsor of Assad's regime, joined the talks for the first time, months after striking a landmark nuclear deal with world powers.

US Secretary of State John Kerry sat at the head of the table for the meeting, which also included senior envoys from Turkey, Italy, Britain, Lebanon, Jordan, Russia, Iraq, Egypt, Germany, Qatar, France, the UAE, Oman and China.

Saudi Foreign Minister Adel al-Jubeir was sat almost as far from his Iranian counterpart Mohammad Javad Zarif as was possible at the tight U-shaped table in the conference room of Vienna's grand Imperial Hotel.

French Foreign Minister Laurent Fabius said a priority was to "fight more effectively against the terrorists" of the ISIL group and Al-Qaeda-affiliated Al-Nusra Front.

"Then it is necessary to organise the political transition," he added as he arrived for the meeting.

"Mr Assad, who is responsible for a large part of the Syrian tragedy, cannot be considered the future of Syria."

The Syrian regime and the opposition were not represented at the discussions aimed at ending a war that has claimed a quarter of a million lives.

In Washington, which along with its Arab and Turkish allies backs Syrian rebels, officials had expressed a cautious hope that the players would agree the outline of a transition that would eventually see Assad step aside.

Just ahead of the talks, 40 people were killed Friday when rockets fired by Syrian government forces crashed into a market in a rebel-held area outside Damascus, the Syrian Observatory for Human Rights said.

Kerry, while warning against expectations of an immediate solution, said he was hopeful about the talks.

"I am hopeful. I don't call it optimism. I am hopeful that we can find a way forward. It is very difficult," he said ahead of the main talks.

Russia, which has waged a month of intense air strikes against Assad's armed opponents, has urged preparations for parliamentary and presidential elections in Syria.

But the idea has been rejected by rebels who say a vote would be impossible in the current circumstances, with millions of Syrians displaced, cities standing in ruins and two-thirds of the country in the hands of various armed groups.

Mounting international concerns about the outpouring of Syrian refugees and the growing extremist threat could set the scene for some kind of political compromise, experts say.

"Overall, we have for the very first time around the table all the major actors and we have a situation of fatigue on the ground, so it could lead to a potential breakthrough," said Karim Bitar, of the Paris-based Institute for International and Strategic Relations.

Underscoring the perils facing those fleeing the war, at least 22 migrants, including 13 children, drowned during the night off Greece as they made a desperate bid to reach Europe.

Their nationalities were not immediately clear but the route is favoured by Syrian refugees and becoming increasingly dangerous as winter approaches.

Even getting Iran and Saudi Arabia -- the Middle East's foremost Shiite and Sunni powers which back opposing sides in conflicts across the Arab world -- to sit at the same table was seen as progress.

Saudi Foreign Minister Adel al-Jubeir, in an interview with the BBC, made it clear that Riyadh is sticking by its view that Assad must leave office quickly.

"He will go either through a political process or he will be removed by force," he warned.

Russia and Iran have made it equally clear that Assad has a right to play a role in an eventual transition towards a mooted unity government and later elections.

The West has accused Russia of concentrating its air campaign in Syria on moderate opposition groups opposed to Assad's rule, although Moscow says it is focusing on defeating ISIL and other "terrorist" organisations.

"The use of force in any form in Syria without agreement of the legitimate government of this country would be unacceptable to us," he told the Interfax news agency, speaking in Russia.

The Pentagon has announced plans to step up its year-old air strikes on ISIL in Syria and Iraq, including even possible "direct action on the ground".