The former Republican Guards gathered on a parade ground near the presidential palace in central Sanaa, demanding that the ministry of finance pay them a bonus for the holy month of Ramadan. 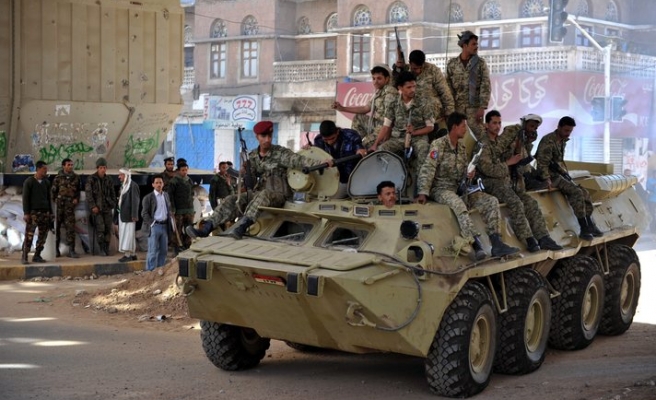 Two Yemeni soldiers were reported dead along with 6 injured as Yemeni Presidential Guards and disbanded Republican Guards clashed in Yemeni capital of Sana'a.

Security forces told Anadolu Agency that Yemeni Presidential Guards intervened to disperse hundreds of soldiers of the Republican Guards holding a rally to protest the government not paying them Ramadan bonuses.

At the clash that broke out during the intervention, 2 Yemeni soldiers were killed while 6 others were injured.

The Presidential Guards used heavy weapons and real bullets to disperse the demostrators, the sources said.

Soldiers once loyal to Yemen's ousted president Ali Abdullah Saleh, protesting against what they say is neglect by the new leadership, clashed with a rival faction of the military in Sanaa on Friday, police and witnesses said.

The hundreds of soldiers protesting were former members of Yemen's elite Republican Guard, which was run by Saleh's powerful son and which Saleh's successor, President Abd-Rabbu Mansour Hadi, abolished last year in a bid to unify the army.

Yemen's military remains divided between allies and opponents of Saleh, who stepped down in a Gulf-brokered deal in 2012 after a year of protests against his rule, but still looms large in Yemen.

The former Republican Guards gathered on a parade ground near the presidential palace in central Sanaa, demanding that the ministry of finance pay them a bonus for the holy month of Ramadan.

Shots were fired between them and the Presidential Guard, a force which is loyal to Hadi, and five people were wounded, a police source said.

Demonstrations by soldiers against poor or late salaries from the cash-strapped government are common in Yemen, and often end in violence. A third of Yemenis live under the poverty line of $2 a day and unemployment is estimated at about 35 percent, with youth joblessness at 60 percent.

The clashes ended when heavily-armed riot police and military police arrived on the scene, a witness said, although the demonstration continued.

Stability in Yemen is a priority for the United States and its Gulf allies, concerned about al Qaeda militants operating in a country that adjoins top oil exporter Saudi Arabia and overlooks major global shipping lanes.