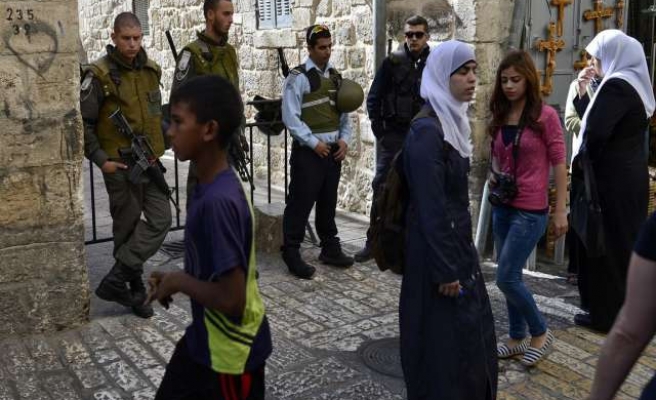 At least 20 Palestinians were injured in clashes with Israeli police in occupied East Jerusalem near the home of a Palestinian man killed last night by Israeli soldiers.

Clashes broke out Thursday afternoon in the Silwan neighborhood, where Israeli forces used stun grenades, rubber bullets and teargas to disperse stone-throwing Palestinian youths, according to an Anadolu Agency correspondent.

Palestinian protesters also torched a car during the clashes. Israeli fire fighters arrived to put out the fire.

Earlier Thursday, Israeli forces killed Moataz Hegazi – who had been suspected of shooting an extremist rabbi one day earlier – in a raid on his East Jerusalem home.

Following the incident, clashes erupted between Israeli forces and Palestinian protesters in Hegazi's Al-Thawri neighborhood and in the Silwan and Isawiya districts.

Eyewitnesses said shops in Jerusalem's Old City had been shut in the wake of the clashes.

Israeli Police said Hegazi – who reportedly spent several years in an Israeli prison before being released in 2012 – had been killed when he opened fire on police while resisting arrest in East Jerusalem.

Three other Palestinians were injured in the Israeli police raid, eyewitnesses said.

In September 2000, a visit to the site by controversial Israeli politician Ariel Sharon sparked what later became known as the "Second Intifada," a popular uprising against the Israeli occupation in which thousands of Palestinians were killed.