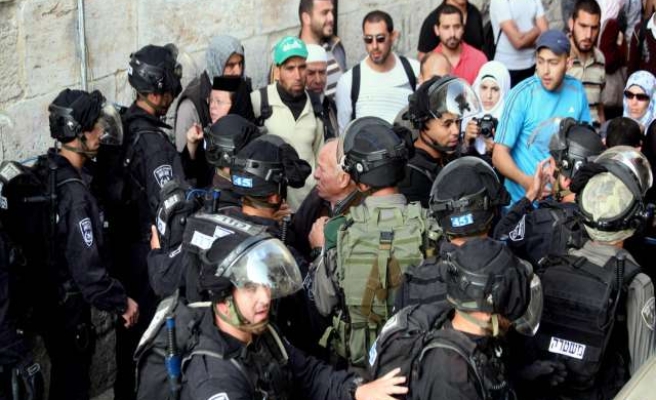 At least 24 Palestinians were arrested during clashes at the gates of Al-Aqsa Mosque compound in Al-Quds (occupied East Jerusalem).

In a statement, the Israeli police said that two personnel were slightly injured in the Sunday violence as 24 Palestinian youths were rounded up in connection with the clashes.

The Israeli police also noted that the compound is closed to visitors.

At least seven Palestinians suffered temporary asphyxiation and bruises in the ensuing clashes as the Israeli police fired teargas in a bid to break up the crowd, they added.

Violence spilled over into other parts of the Old City in Al-Quds between angry Palestinian protesters and Israeli policemen, the eyewitnesses said.

"The Israeli police closed a number of the compound's gates and denied access to Palestinians under the age of 50, leading to clashes with worshippers," a Palestinian guard of the compound told Anadolu Agency.

Tension has been high in Al-Quds over threats by extremist Jewish groups, which have called on supporters to force their way into the holy compound during the weeklong Jewish Passover holiday, the last day of which is celebrated Sunday.

For Muslims, Al-Aqsa represents the world's third holiest site. Jews refer to the area as the "Temple Mount," claiming it was the site of two prominent Jewish temples in ancient times.

If Rome was run by the Jews from Eastern Europe who destroyed both Temples? Did the Atheists destroy the Temples so that they could Tax and persecute the Israelites? The Nazis persecuted their own and the 9/11 attacks were against their own country men although of different Religion.It’s not just ancient Rome but even ancient Persia as well as Egypt and other places that was run by them in secret. Byzantinium has a dark and evil history yet all the time they keep going on about anti Semitism!