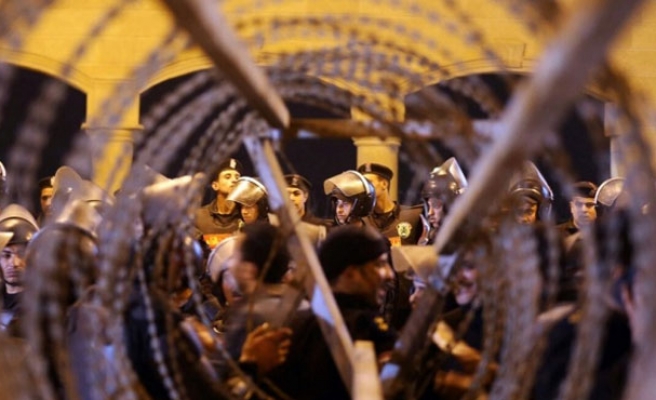 Thirty people at least were killed on Sunday in clashes between soccer fans and policemen outside a stadium in Egyptian capital Cairo.

Most of the dead were suffocated when the crowd stampeded after police used tear gas to clear the fans trying to force their way into a league match between two Cairo clubs, Zamalek and Enppi, doctors and witnesses said.

A health ministry spokesman told by phone the final toll was 19 dead and 20 injured. The reason for the discrepancy in numbers between the health ministry and the public prosecutor's office was not immediately clear.

Prosecutor-General, Hesham Barakat, meanwhile, ordered an investigation into the death of the fans.

The Prosecutor-General did not, however, mention the reason for the death of the fans.

It only said that it had ordered forensic experts to examine the bodies of the victims to know the reason for their death.

Al-Zamalek Club fans confirmed, meanwhile, the death of 22 fellow fans in the clashes.

The fans, who are called White Knights, added in a note on their Facebook page that the bodies of the 30 victims had arrived at hospitals.

Prime Minister Ibrahim Mahlab held an emergency meeting with the ministers of health, the interior and sports to discuss the events, according to Egypt's state-run television.

Earlier in the day, the Interior Ministry said in a statement that a large number of fans had tried to break into the stadium, but the following stampede had caused the injury of scores of fans.

The ministry added that the injured victims were taken to hospital for treatment.

In the aftermath of Sunday’s deaths, witnesses said the police’s attack was an unprovoked assault on people holding tickets. Amr, a musician who survived a shotgun pellet to his chest, said that around 1,000 fans became trapped in a narrow pathway leading to the stadium gates shortly after 4pm. Many of them had held up their tickets, including Amr, but they were prevented from entering as police closed off the passageway with barbed wire. “We stayed there for a very long time and people started to injure themselves on the barbed wire,” he said. “We were stuck inside and people started moving and shouting. So the [police] thought we were trying to make problems, so they fired a teargas canister.”

By Amr’s account, one fan fired back a firework, which was in turn met with more teargas – and then a stampede started, which the police met with gunfire. “After that, people started to run in every direction. They didn’t know where to go. It was a very chaotic situation and they didn’t stop shooting during all this time.”

After 10 minutes of mayhem, survivors crept back. “The passage was empty,” said Saad Abdelhamid. “On the ground were just bodies and corpses. Some people tried to get inside the passage to rescue the bodies, but the police shot them with birdshot.”

According to Amr, fans responded with more fireworks and stones. When the Zamalek team bus arrived in a police convoy, people tried to prevent the bus from entering the area, and attacked a nearby police car, sparking another round of clashes.

A video circulated online shows hundreds of fans hemmed in by the barbed wire, and police firing straight at the crowd – but the sequence of events is unclear.

Nevertheless, for their part, mourners outside the Zeinhom morgue were certain that their friends had been targeted on purpose. “Witness this,” said one man, holding up his bloodied hands. “Witness what our government is doing to our kids.”

A few metres away, Saad Abdelhamid said: “The massacre that took placed today was revenge on those who took part in the revolution.”

More widely, the deaths have revived a debate about persistently aggressive police tactics, and about the logic of opening up football matches, a frequent flashpoint, to fans. For much of the past four years, most games have been played behind closed doors.

“I’m wondering in the first place, why barbed wire, why gas and why fireworks?” asked Amr. “Why are you responding to fireworks with live ammunition?”

It noted, however, that it was not notified about any fatalities in the event. The match was played as normal.

Soccer matches are often a flashpoint for violence in Egypt where 72 fans were killed at a match in Port Said in February 2012. Since then Egypt has curbed the number of people allowed to attend, and supporters have often tried to storm stadiums they are banned from entering.

Outside the Cairo hospital treating the injured, scores of youths wearing Zamalek T-shirts appeared shocked as families arrived to see if their relatives were safe.

One mother cried and shouted when she found the name of her son on a list of the dead posted by hospital staff.

"I'd told him: leave soccer matches," she said.

Relations between security forces and fan groups known as Ultras have been tense since the 2011 popular uprising that ended the rule of autocrat Hosni Mubarak, in which the Ultras played a key role.

"Huge numbers of Zamalek club fans came to Air Defense Stadium to attend the match ... and tried to storm the stadium gates by force, which prompted the troops to prevent them from continuing the assault," the interior ministry said.

The public prosecution ordered the arrest of the leaders of the Zamalek supporters group, Ultras White Knights, after Sunday's incident, official media reported.

On their Facebook page, the Ultras White Knights described the 30 dead as "martyrs" and accused security forces of a "massacre".

Despite the violence, the match went ahead and ended with a 1-1 draw.

The Egyptian Football Federation said it had reversed an earlier decision to allow fans to return to the stadiums by the start of the second half of the season. The original decision had been taken only a few days ago.

Shortly after that, the Cabinet said in a statement that the national league championship would be postponed indefinitely.