8 injured in attack on pro-Morsi rally in Cairo-UPDATED 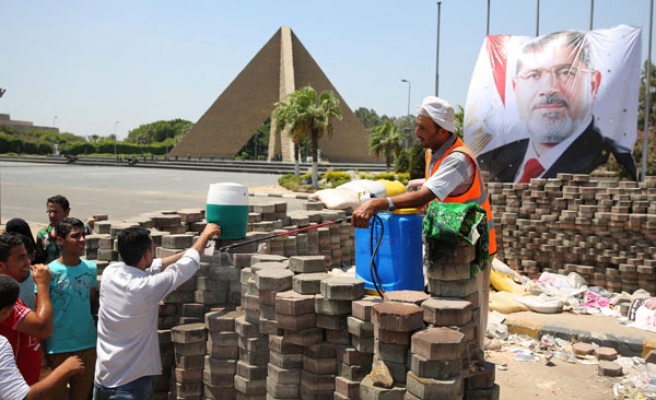 At least eight people were injured on Sunday when a protest march by supporters of ousted president Mohamed Morsi was attacked in southern Cairo, according to medics at the scene.

The injured were moved to a field hospital at Rabaa al-Adawiya Square, the site of a six-week-old pro-Morsi sit-in in eastern Cairo.

According to eyewitnesses, a march by Morsi supporters from Cairo's Sayeda Zeinab Mosque to the nearby Ramses Square came under attack by unidentified assailants armed with sticks and clubs.

Mohamed Mahmoud, one of the injured marchers, said that protesters had been heading to an assembly point near the mosque when they were attacked.

"We were coming out of the Sayeda Zeinab subway station when we came under attack by thugs who hurled bricks and bottles at us," he said. "Then they attacked us with guns and blunt instruments."

Mohamed Abdel-Hadi, who witnessed the attack, said that police had been conspicuously absent as thugs attacked marchers with bladed weapons.

Ever since his July 3 ouster by the army following mass protests against him, Morsi's supporters have been staging daily rallies and sit-ins to condemn what they see as a "military coup" against the elected president and to demand his reinstatement.