The height of the wall changes from 8 to 12 metres from place to place. There are barbed-wire entanglement and have security towers every 200 metres. 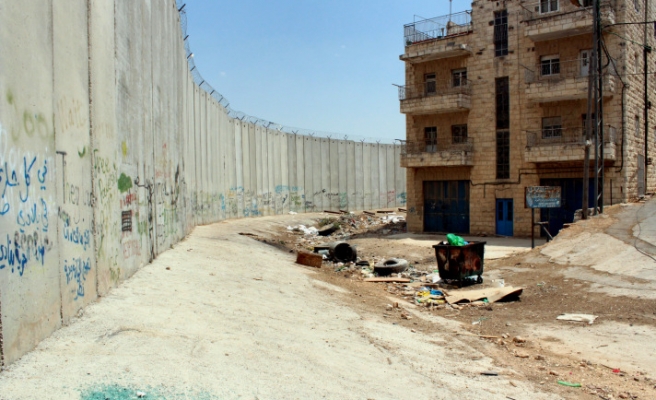 Construction of 61 percent of the "Security Fence" named by Israeli government or "Wall of Shame" named by Palestinians has been completed so far.

The construction of the Israel West Bank wall had started just after the "Second Intifada" in 2004. It has reached 438 kilometres long until now.

The height of the wall changes from 8 to 12 metres from place to place. There are barbed-wire entanglement and have security towers every 200 metres.

Staff member from United Nations explained the wall in detail to Anadolu Agency and informed that the 85 percent of the wall is rising on Palestinian land inside the occupied West Bank.

Date for laying the last brick is not known at the moment but what they know is that the wall will be 15 times longer than the "Berlin Wall".

When completed the wall will be 708 kilometres long and it will be completely isolating the people of Palestine from the rest of the world.

Lives of the people who inhabit around the wall has been paralysed. It splits some of the families, splits their homes into two and splits their farmlands.

People who plant can only travel twice a year to their farmlands which is on the other side of the wall and they can only stay for a day long.

More than just poverty, the wall also brings several other problems to Palestinians' lives too.

The zone where they used to throw their solid waste away is on the other side of the wall now, that is why most of their residential areas are covered with waste. They are not collected anymore, they burn them in the neighbourhoods, which threatens their lives as it releases toxic.