Heba Zakariya, who was freed after eight hours of detentiod, said male detainees, including the Turkish reporter, had been detained in a separate area. Several times, she said, she could see them being interrogated by security officials. 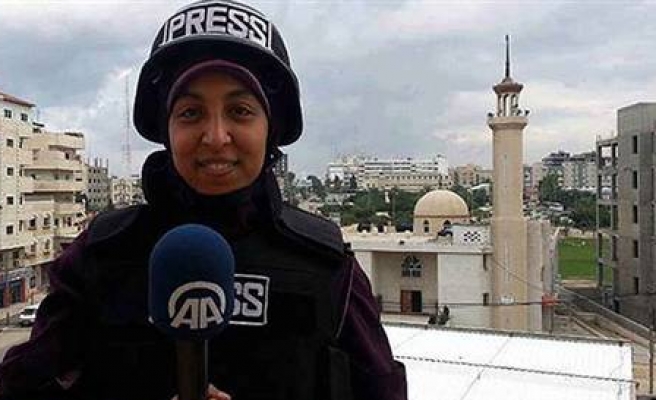 Egyptian authorities have released an Anadolu Agency correspondent who was detained Friday while covering a standoff between Egyptian security forces and anti-coup protesters holed up inside a mosque near Cairo's Ramses Square.

Heba Zakariya, who was reporting the standoff from inside Fath Mosque, was freed after eight hours of detention. She was among journalists covering the day-long siege of the Ramses mosque when she was arrested. Metin Turan from the Turkish state-broadcaster TRT was also among those detained.

The two had later been taken to Tora jail in southern Cairo.

Speaking to AA via telephone, Zakariya said she was released at 4:20 am along with 26 other women arrested following the standoff. A prisoner transport vehicle took them to Al-Azhar, where they stayed until the end of an overnight curfew.

Six other women detained along with Zakariya, however, were not released, including three Irish-Egyptian dual nationals who will be probably be handed over to the Irish embassy. The three others were escorted out of the mosque by relatives, who were also reported to be police officers.

According to Zakariya, prison authorities did not interrogate the detained women, but asked them repeatedly about their personal information.

Detainees were held in an empty, dirty room and spent the night sitting on the floor, she said.

While most of the women managed to retrieve their mobile phones seized during the arrest, some of the "expensive ones" were said to have been "lost." Prison officials had promised to look for them, Zakariya said.

As for male detainees, including the Turkish reporter, Zakariya said they had been detained in a separate area. Several times, she said, she could see them being interrogated by security officials.

Women arrested along with their husbands and relatives were reluctant to leave without the men, but prison officials promised that the latter would be released later on Sunday.

Hundreds of anti-coup protesters, including women and children, had taken refuge in the mosque amid clashes with security forces in Cairo's Ramses Square on Friday.

Later, security forces tightened control over the entire square, besieging Fath Mosque and the nearby Tawheed Mosque, in which an indeterminate number of other demonstrators had sought refuge.

Protesters feared they would be attacked by thugs and hostile residents if they left the mosque and therefore opted to stay inside.

More than 181 people were killed on Friday in violence that accompanied mass pro-Morsi demonstrations in several Egyptian cities, held to protest Wednesday's violent dispersal of two large pro-Morsi protest sites in the capital during which hundreds were killed.

According to the Health Ministry, at least 638 people died in nationwide violence on Wednesday, including 375 killed in the two sit-in dispersals.