Activists called for the United Nations to send international observers to Syria, appealing for foreign help to stop the killing of civilians ahead of Friday prayers. 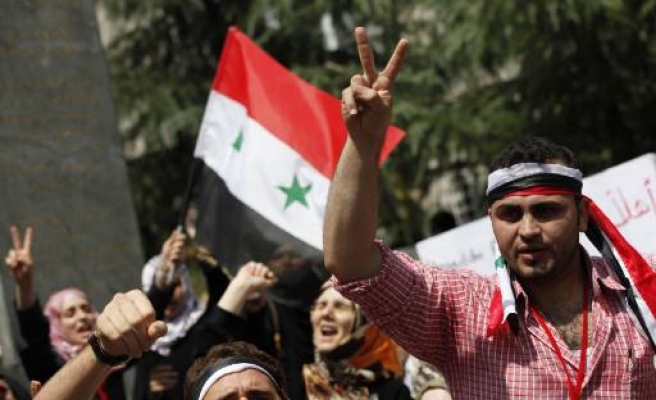 Activists called for the United Nations to send international observers to Syria, appealing for foreign help to stop the killing of civilians ahead of Friday prayers that has regularly seen some of Syria's worse bloodshed in six months of pro-democracy protests.

"The Syrian people calls on the United Nations to adopt a resolution to set up a permanent observer mission in Syria," activists said on their Facebook page, "Syrian Revolution."

"We demand access to the international media, we demand the protection of civilians," they said, calling for fresh demonstrations on Friday, the Muslim day of rest and prayers.

The Syrian Revolution General Commission umbrella bloc of activists appealed to the international community on Thursday to send in human rights monitors to help deter military attacks on civilians in the increasingly bloody crackdown.

"Calling for outside intervention is a sensitive issue that could be used by the regime to label its opponents as traitors. We are calling for international observers as a first step," spokesman Ahmad al-Khatib told Reuters.

"If the regime refuses it will open the door on itself for other action, such as no-tank or no-fly zones," he said, adding that Assad's forces have killed 3,000 civilians, thousands have been arrested and thousands more are counted as missing.

The announcement came as Syrian forces arrested dozens of people in house-to-house raids in the city of Homs following military operations that killed at least 27 civilians on Wednesday. Activists and residents also reported more defections among the rank-and-file army.

No country has proposed the kind of intervention in Syria that NATO carried out in Libya. Syria has three times Libya's population, and unlike isolated Libya it is intricately linked to neighbours on the fault lines of Middle East conflicts.

The Syrian military launched offensives against the cities of Latakia, Aleppo and Deir al-Zor last month, with Assad repeatedly saying he was fighting a foreign conspiracy to divide Syria and the authorities blaming "armed terrorist groups" for the killings, including 500 army and police.

The argument did not go well with the West, and with Turkey, which had once strongly backed Assad.

"Mr. Assad, how can you say you are killing terrorists when you were actually shelling Latakia from the sea and hitting civilian targets?" Turkish Prime Minister Tayyip Erdogan told al-Jazeera Television in an interview broadcast on Thursday.

"We are moving patiently now. But after the consultations, we will give our final word, which will show an exit from the tunnel, because we are not the ones who had put Assad on this dead-end road. It was he and those around him who entered this dead-end road."

In the northwestern province of Idlib near the border with Turkey, at least three army defectors were killed by the military as it raided the Jabal al-Zawiya area in pursuit of deserters, local activists said.

Syria's rank-and-file soldiers are majority Sunni, like the rest of the country. Assad, the ruling hierarchy and most of the security apparatus and army officer core are from Syria's minority Alawite sect, an offshoot of Islam.

Russia, which has an old navy base in Syria and gas and oil concessions, hinted that it is ready to discuss a possible U.N. Security Council resolution on Syria but will not support a document that targets only the authorities for censure.

"They must send a firm signal to all conflicting sides that they need to sit down at the negotiations table, they need to agree and stop the bloodshed," President Dmitry Medvedev said in published remarks.