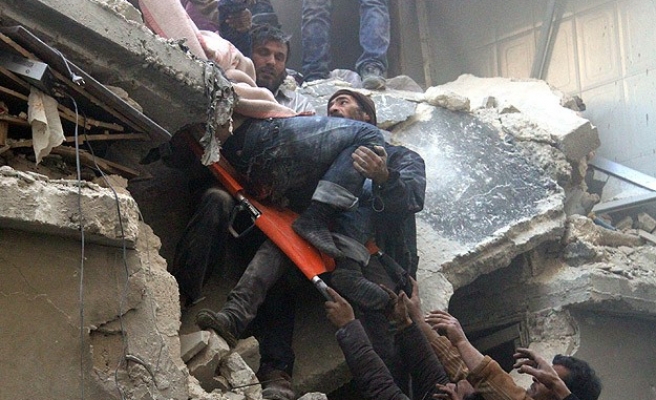 At least 33 people were killed when Syrian government warplanes attacked a busy market in a rebel-controlled district of Aleppo on Thursday, the Syrian Observatory for Human Rights said.

Activists in the area put the death count as high as 40 and said dozens were wounded. They said a warplane struck the neighbourhood of Hullok in the northeastern part of the city with a missile, turned around and then fired another one.

The attack came a day after an air strike on a school in Aleppo killed at least 18 people, mainly children.

Despite the continuing civil war, Syrian authorities are preparing for a June presidential election in which President Bashar al-Assad is expected to extend his grip on power.

Aleppo is divided between Assad's forces and rebels aiming to topple him. Fighting has destroyed much of what was once Syria's commercial capital.

For months Assad's forces have rained barrel bombs - crude but powerful explosives which are not designed for precision targeting - on rebel held parts of Aleppo despite a U.N. appeal to end the practice.

More than 150,000 people have been killed in three years of conflict that grew out of street protests against Assad's rule.