ISIL militants have abducted at least 220 people from Assyrian Christian villages in northeastern Syria during a three-day offensive, a monitoring group that tracks violence in Syria said 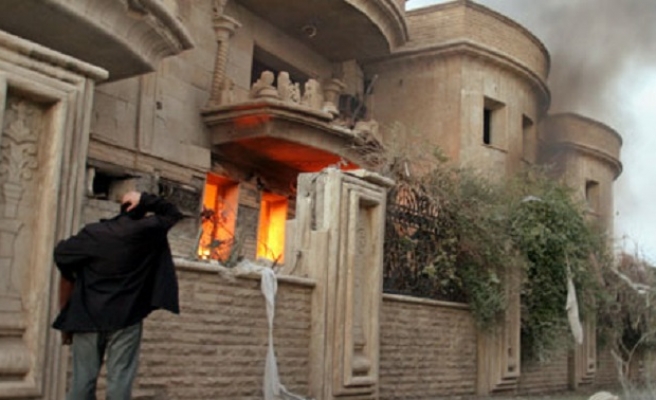 A U.S.-led alliance launched air strikes against ISIL on Thursday in an area of northeast Syria where the militants are now estimated to have abducted at least 220 Assyrian Christians this week, a group monitoring the war reported.

The Syrian Observatory for Human Rights said the air strikes targeted ISIL fighters near the town of Tel Tamr, where the militants, also known as ISIS, had captured 10 Assyrian villages.

A prominent Syrian Christian, Bassam Ishak, told Reuters: "Some people have tried to call them by cellphone, the relatives that have been abducted, and they get an answer from a member of ISIS who tells that they will send the head of their relative.

"They are trying to terrorise the parents, the relatives in the Christian Assyrian community," said Ishak, who is president of the Syriac National Council of Syria.

The militants have previously used kidnappings to trade captives for their own captured fighters. It was not clear if they planned to do the same this time.

"What is happening is a threat to our existence," said Ablahd Kourieh, an Assyrian Christian who is deputy head of a Kurdish-led defence council in northeastern Syria, speaking to Reuters from the region via Skype. He estimated the number of abducted Assyrians was even higher, at between 350 and 400.

He called on the U.S.-led alliance to mount air strikes and to arm Kurdish-led forces which are battling ISIL in the region. He estimated that 3,000 Assyrians had fled from the villages for the main cities of Qamishli and Hasaka.

"We call for bombardment of the terrorists' positions there, and the provision of quality weapons," said Kourieh. He said there had been no contact with ISIL, which has yet to claim the abductions.

The United States and its allies have carried out hundreds of air strikes in both Iraq and Syria since launching a campaign to "degrade and destroy" ISIL last year. Washington on Wednesday condemned the attacks against Christians, which it said included the burning of homes and churches and abduction of women, children and the elderly.

The region is strategically important to ISIL as one of the bridges between land it controls in Syria and Iraq. In recent weeks it has lost ground in northeast Syria after being pushed out of the Kurdish town of Kobani in January by Kurdish forces backed by U.S.-led airstrikes.

These same strikes, however, have been unable to stop its advance into smaller villages.

"ISIS now controls 10 Christian villages," observatory head Rami Abdulrahman said by phone, using an acronym for ISIL. "They have taken the people they kidnapped away from the villages and into their territory," he said.

Two Kurdish officials said around 90 people had been abducted. One of the officials, Nasir Haj Mahmoud, from the YPG militia in northeastern Syria, said they were taken to Shedadeh village, which is ISIL territory. "Some Assyrian villages are still under ISIL control," he said.

Mahmoud said YPG had cut a main road linking Tel Hamis with al-Houl, a town just a few miles (kilometres) from the Iraqi border, and prevented attempts by ISIL to reopen it. "The YPG are still in control," he said.

He said dozens had died overnight in clashes, which underline the emergence of well-organised Syrian Kurdish militia as the main partner for the U.S.-led alliance against ISIL in Syria.

ISIL fighters also launched an attack on rival insurgents east of Damascus, the group said on social media on Thursday, a rare skirmish near the southern capital from the militant organisation, which is strongest in the northeast.

An official Twitter account for ISIL said its fighters ambushed members of the Free Syrian Army, an alliance of western-backed rebels, on Wednesday in the Eastern Ghouta area.

It said the FSA suffered casualties, and ISIL fighters seized tanks and ammunition in what it called a strategic location close to the government stronghold of central Damascus. The Observatory confirmed the attack but said it had targeted rival brigades.

Units from ISIL are staging increasing attacks in the south, mostly in the Qalamoun Mountain range that runs north-south to Damascus and also borders Lebanon.

The Lebanese army deployed along that border on Thursday near the village of Ras Baalbek and fired artillery at militants who move between Syria and Lebanon, a Lebanese security source said.