The impact of the strikes on the group's capabilities was not immediately clear. IS has gained sympathy from many rebels after the attacks, including from rival groups 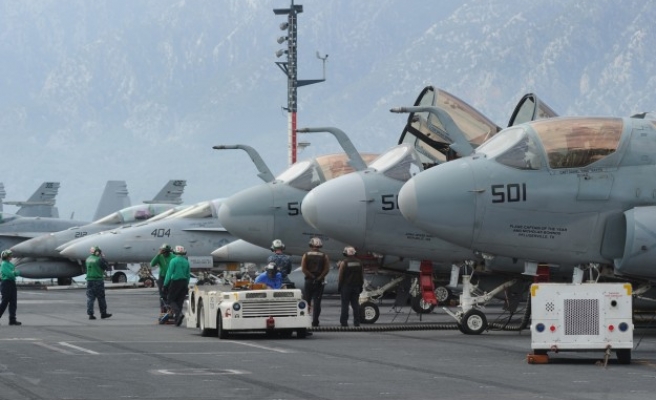 Air strikes believed to have been carried out by U.S.-led forces hit three makeshift oil refineries in Syria's Raqqa province early on Sunday as part of an assault to weaken ISIL (IS) militants, a monitoring group said.

The Britain-based Syrian Observatory for Human Rights said the attacks occurred shortly after midnight, adding that they also hit a plastic factory.

ISIL fighters have control over oil produced in eastern Syria and have set up small, makeshift refineries to distil the crude into fuel, one of their main sources of income.

"These so-called refineries are not a real target and they do not weaken the ISIL as they do not have any financial value for them," Rami Abdelrahman of the Observatory told Reuters.

"They are composed of trucks with equipment to separate diesel and petrol used by civilians."

The United States has been carrying out strikes in Iraq since Aug. 8 and in Syria, with the help of Arab allies, since Tuesday, in a campaign it says is aimed at "degrading and destroying" the militants who have captured swathes of both countries.

But the impact of the strikes on the group's capabilities was not immediately clear. IS has gained sympathy from many rebels after the attacks, including from rival groups.

Scores of fighters have left Nusra Front and other groups in Syria to join IS since the strikes started.

The Nusra Front is coming under increasing pressure from its own members to reconcile with IS to fight what they describe as a "crusader" campaign against Islam.

On Saturday, the group gave its first reaction to the strikes, vowing to retaliate against Western and Arab countries that took part in the coalition.

"It's not a war against Nusra Front, it's a war against Islam," Nusra spokesman Abu Frias al-Suri said in an audio message published on the group's social media network.

"These countries have done a despicable act that will put them on the list of those targeted by jihadist forces all over the world," the spokesman said.

A Twitter account run by an Qaeda member said the leader of the Khorasan group was killed in a U.S. air strike in Syria, SITE monitoring service said on Sunday, following several days of uncertainty over whether he survived the raid.

A U.S. official on Sept. 24 said the United States believed Mohsin al-Fadhli had been killed in a strike a day earlier, but the Pentagon said several hours later that it was still investigating what had happened to him.

In a message posted on Sept. 27, the fighters offered condolences for the death of Kuwaiti-born Fadhli, otherwise known as Abu Asmaa al-Kuwati or Abu Asmaa al-Jazrawi, following the Sept. 23 air strike, SITE reported.

U.S. oficials have described Khorasan as a network of seasoned al Qaeda fighters with battlefield experience mostly in Pakistan and Afghanistan that is now working in league with the Nusra Front.

Khorasan is a term for an area including parts of Pakistan and Afghanistan where al Qaeda's main council is believed to be in hiding.

After the Sept. 23 strikes, U.S. officials said they were was still assessing how badly Khorasan had been hit. Militants on social media have said there were unconfirmed reports that the 33-year-old Fadhli had been killed.

SITE did not name the fighter who reported Fadhli's death but said he had trained under a close associate of al Qaeda leader Ayman al-Zawahri and had fought in Khorasan before traveling to Syria.

A 2012 State Department notice offering a $7 million reward for information on Fadhli's whereabouts said he was an al Qaeda financier close to al Qaeda founder Osama bin Laden and among the few who knew in advance about the Sept. 11, 2001, attacks.