Attackers are targeting everything valuable in Jerusalem, Palestinian mufti says 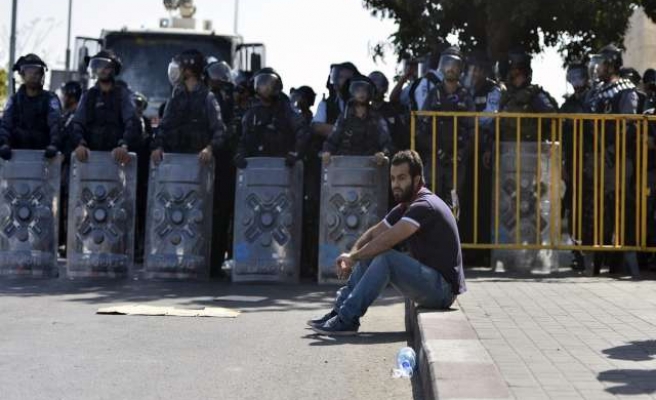 The Palestinian mufti and imam of al-Aqsa Mosque in Jerusalem, the scene of attacks and violent incidents in recent months, has described the situation in the holy city as "painful" during a visit to the Bosnian capital of Sarajevo.

Mohammed Ahmed Hossein said Monday after being received by the head of the Islamic Community in Bosnia and Herzegovina, Husein Kavazovic, that everything of value in Jerusalem -- viewed by Muslims as one of the world's holiest sites -- was being targeted by attackers.

Hossein said: "Truly, the situation is very painful, not only in the mosque compound, but in the entire city.

"Attackers target everything that is valuable in the holy city, such as the al-Aqsa Mosque, but do not spare churches either."

"The organizers of the attacks do not differentiate between them -- they fire on both and write racist symbols on their walls," Hossein said to reporters after meeting Kavazovic.

Hossein said Israel's support for the attackers had made the situation worse.

He added: "What concerns us are that the constant intrusions in the mosque are supported by the Israeli government.

"Extremists advocate the destruction of the Al-Aqsa Mosque and the building of a so-called 'Solomon's temple' with the aim of conducting a racist project in Palestine."

He said it was up to all Muslims in the world to urge Israel to allow Palestinians to decide how they wanted to live, in accordance with international law.

Comparing Sarajevo and Jerusalem, Hossein said the capital of Bosnia was a "European Quds" due to its multi-ethnicity and presence of different religions.

He said: "Talking with Kavazovic today, I learned that Bosnia has an inter-religious council which advocates dialogue between Muslims, Catholics and others who live here.

"We support it, as it is important in building sustainable security and peace in the country."

"Here you have mosques, churches and synagogues next to one another, similar to what we have in Jerusalem," he said.

The Al-Aqsa Mosque had been the target of numerous attacks and incidents during the last couple of months.

Tension began to run high after Israeli authorities closed the mosque compound in late October following the shooting of an extremist rabbi in West Jerusalem.

A total of 2,708 Israelis, mostly Jewish settlers, stormed the Al-Aqsa compound in October and November, according to the Al-Aqsa Foundation for Endowment and Heritage.

The mosque closure, along with the killing by Israeli police of a young Palestinian man suspected of shooting the rabbi, prompted angry protests by Palestinians in East Jerusalem.

Since then, several Israelis have been killed and injured in a spate of attacks by Palestinians -- both in the occupied territories and inside the self-proclaimed Jewish state.

For Muslims, Al-Aqsa represents the world's third-holiest site while Jews refer to the area as the "Temple Mount," claiming it to be the site of two Jewish temples in ancient times.