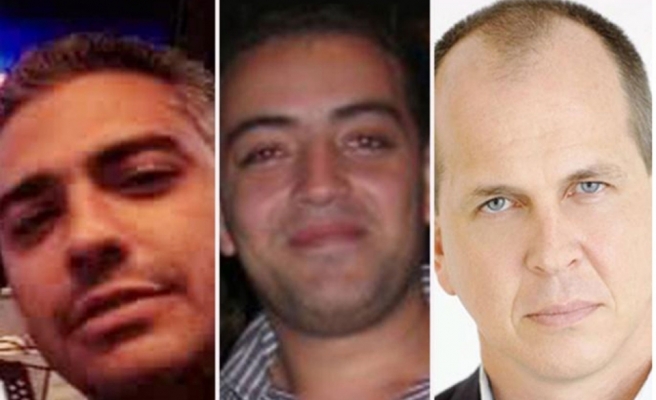 The first hearing in the trial of four foreign journalists working for the Doha-based Al Jazeera news network and 16 Egyptians was held on Thursday in Cairo against a stepped-up international solidarity campaign pressing for their release.

The court adjourned to March 5 the trial of 20 Al Jazeera journalists – including an Australian, a Dutch and two UK nationals – who face charges of disrupting Egypt's national security by producing fabricated news stories and footage to distort Egypt's international image.

Mohamed Fadel Fahmi, Egyptian-Canadian journalist and Al Jazeera's Cairo bureau chief, is also accused – along with the other 15 Egyptians – of belonging to the Muslim Brotherhood, the group to which ousted president Mohamed Morsi belongs.

"[Thursday is an] important day for press freedom in Egypt. We either move forward or sink in a long dark abyss," prominent Egyptian newswoman Shahira Amin said on Twitter.

Ahead of the hearing, Amin and a number of other journalists and activists gathered in front of the court venue on the eastern outskirts of Cairo. The Australian consul and a representative of the Canadian embassy in Cairo also appeared at the court venue.

Relatives of Fahmi and Australian journalist Peter Greste, who has vehemently denied the charges, were also present in front of the court as Fahmi and Greste appeared in person for the first time since their arrest.

"The prosecution of these journalists for speaking with Muslim Brotherhood members… shows how fast the space for dissent in Egypt is evaporating," said Joe Stork, HRW's deputy Middle East director.

Late last December, security forces raided a room in Cairo's Marriott hotel and arrested Fahmi and Greste after questioning them and confiscating their equipment.

The raid came days after the government declared the Brotherhood a "terrorist" group, ratcheting up an already harsh crackdown on Morsi's supporters.

Egypt's military-backed administration had repeatedly accused Al Jazeera of bias in favor of Morsi – which the channel denies – amid ongoing tensions with the Qatari government over Doha's criticisms of Morsi's ouster.

State and private media have often accused foreign journalists of participating in a "conspiracy" aimed at destabilizing the country by garnering support for the Brotherhood.

On the eve of the trial, seven top editors from international media giants BBC, Sky News, ITN, Reuters, NBC and ABC News signed an open letter demanding the release of Greste and the other detained journalists.

"We think Egypt's move is deeply damaging to the future of impartial journalism in the country and that its actions are unjust and unacceptable," read an excerpt from the letter.

The letter comes amid an ongoing solidarity campaign by journalists from around the world.

A number of other foreign reporters staged a campaign on Twitter, taking photos of themselves with their mouths taped shut and posting the pictures with the hashtag #FreeAJStaff.

Support for the detained journalists intensified after a couple of letters by Greste were leaked from Cairo's Tora Prison, where he and some of the other defendants were held, and published in several international news outlets in January.

In his messages, Greste said he was being denied visits by lawyers and that he and his colleagues, detained separately, were being locked – for over 20 hours a day – in "mosquito-infested cells [and] sleeping on the floor with no books or writing materials to break the soul-destroying tedium."

Moreover, a statement by Fahmi's family on Twitter said he had sustained a shoulder fracture prior to his arrest and that his injury had worsened because prison authorities had not sent a doctor to examine him, despite earlier authorization to do so by prosecutors.

The UN, the US and the EU have all voiced "deep concern" over freedom of expression in Egypt following the reporters' detention.

Earlier in February, US Press Secretary Jay Carney said the US administration had strongly urged the Egyptian government to drop the charges against the detained journalists and a number of acclaimed Egyptian academics detained on similar charges.

Alongside the HRW, rights watchdog Amnesty International and pro-press freedom organizations including the Committee to Protect Journalists (CPJ) and Reporters Without Borders (RWB) had also followed the incident and decried the arrests.

Calling for their immediate release, Mansour asserted that the "outrageous" charges filed against the Al Jazeera journalists illustrated the Egyptian government's "lack of tolerance" for criticism.

For their part, the Egyptian authorities insist that none of those detained since Morsi's ouster – thought to number in the thousands – are being held on political charges.

However, presidential aide Mostafa Hegazi declined to comment on the journalists' case when confronted with reporters' questions at a January press conference after he had asserted that Egypt's newly-approved constitution protected freedom of speech.

The New York-based CPJ listed Egypt as among the three deadliest countries for journalists in 2013. According to a CPJ report issued last December, at least five journalists have been killed, 30 assaulted and at least 60 detained since Morsi's ouster.

Eleven Egyptian news outlets were raided during the same period, the report noted.