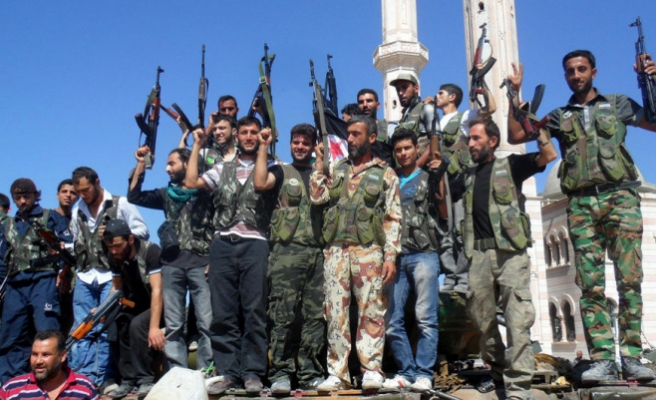 Around 150 fighters belonging to the Free Syrian Army have been detained by the al-Nusra Front in Syria’s Idlib province, The Anadolu Agency has learnt.

The AA was recently given access to prisoners in al-Nusra's custody.

Al-Nusra, which controls most of Idlib province’s countryside, has charged the Free Syrian Army fighters of not only attacking their group, but also being involved in alleged corruption.

The fates of the prisoners are expected to be decided in courts organized by the al-Nusra in the area.

According to an AA reporter at the scene, the prison consisted of only one dormitory that did not meet any health standard.

The reporter was told that the prisoners, who belonged to various subgroups within the Free Syrian Army, were not being ill-treated and were, in fact, being given lessons and religious advices from al-Nusra militants.

Husam Turki Zoraik, a detained militant belonging to the al-Ansar Brigades, said he was captured in Hama province’s Qalaat al-Madiq.

Zoraik said he escaped from his town Kafr Sijnah in Idlib’s countryside after al-Nusra attacked his group’s base. Later, he surrendered to the al-Nusra militants.

Although he may have been under duress, the detained fighter said the al-Nusra militants had not treated him poorly.

"We provide water and food to the prisoners. They are also sent to a court in the area after being interrogated," Abu-Mohsin, an al-Nusra commander, said.

"We even keep the belongings of the prisoners in a safe box," Abu-Mohasin added.

This is the first time a media mean was allowed to enter an al-Nusra prison.