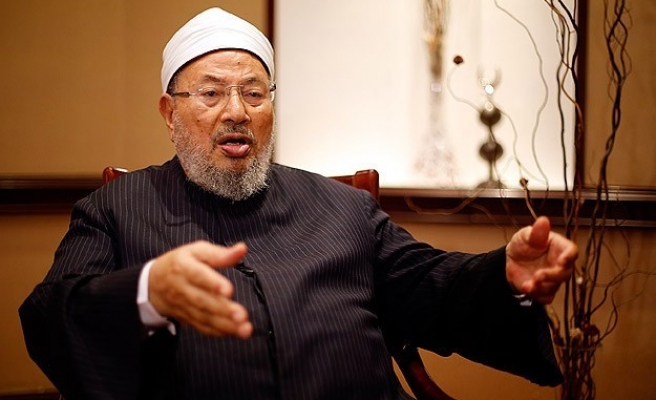 A Qatar-based Muslim cleric called for protests in Egypt on the anniversary of the country's Jan 25 uprising against Hosni Mubarak and said Mohamed Mursi is Egypt's "legitimate" leader, in a speech that may worsen relations between Qatar and Egypt.

Qaradawi's outspoken support for the movement has contributed to a diplomatic rift between Qatar and its Gulf Arab allies and Egypt, who consider the group a security threat and supported Mursi's overthrow.

Since then, Qaradawi has refrained from delivering Friday sermons. But this has not stopped him from criticizing Egypt's rulers during conferences or by statements often sent by email.

"I call on the people of Egypt, all those capable to go out of their houses on this great occasion ... Egyptians should go out and express that they don't want anything but the revolution they had started," Qaradawi said in a video recording posted on his Twitter account on Sunday.

After the Jan 25 uprising in 2011, Qaradawi said, a "fair and transparent" election put Mursi in power.

The 2011 protests ousted Egyptian President Mubarak, after which Mursi was elected, taking office in June 2012. However, a further wave of protests against Mursi erupted, and the military forced him out of power a year later. Sisi, a former army chief, was elected president in May 2014.

Sporadic violence and protests broke out in Egypt on Sunday, but the country's security forces have moved quickly to disperse them. Mursi supporters have been rounded up.

A source close to Qaradawi confirmed that the cleric is still in Doha and the recording of the message posted took place in Qatar.

Angered by Qatari policy, Saudi Arabia, the United Arab Emirates and Bahrain withdrew their ambassadors from the fellow GCC member last March, accusing it of undermining their domestic security through its support of the Muslim Brotherhood.

Anunprecedented eight-month rift in GCC relations ended in November. The ambassadors returned and Doha promised to scale down its support for the Brotherhood, according to western diplomats in Doha.

In recent months, Qatar has taken steps to improve relations with Cairo, such as suspending broadcasts by the Qatari-owned al Jazeera television network of an Egypt-focused channel. But Qatar still still hosts a number of Islamic figures, including Qaradawi, a continuous source of irritation to Egypt.