According to the Treaty of Ankara (1921) signed between France and Turkey, the tomb of Suleyman Shah in Aleppo is officially Turkish territory, which is appointed with Turkish guardians and hosts the Turkish flag. 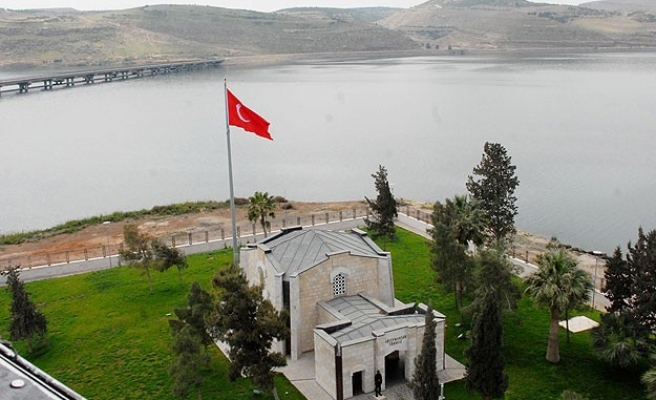 Clashes between Syrian opposition groups the Free Syrian Army (FSA) and the Islamic State of Iraq and the Levant (ISIL) have intensified around the tomb of Suleyman Shah in the city of Aleppo.

According to Article 9 of the Treaty of Ankara (1921) signed between France and Turkey, the tomb of Suleyman Shah is officially Turkish territory, which is appointed with Turkish guardians and hosts the Turkish flag.

Turkish troops have therefore upped their presence around the tomb, preparing for the possibility on an attack, as gun battles between the two rival opposition groups rage around the town of Karakozak.

Turkmen tribal leader Suleyman at-Turkmani warned that the ISIL had previously destroyed the tombs of saints in Tel Abyad and could turn on the Suleyman Shah's tomb, putting Turkish soldiers stations at the tomb in great danger.

Turkmani urgently called on Turkey and the Istanbul-based Syrian National Coalition opposition group to protect Islamic heritage sites and protect Turkmens from attacks by regime forces and the ISIL.

On 5 August 2013 the Syrian civil war promted Turkish Prime Minister Recep Tayyip Erdogan to warn that any attack on the tomb would be considered an attack on Turkey as well as an attack on a NATO-member state.

ISIL rebels and their local supporters have killed at least 22 people in a village in northern Syria near the Turkish border, opposition activists said on Wednesday.

The Syrian Observatory for Human Rights monitoring group quoted residents in Shuyukh, 100 km (65 miles) northeast of Aleppo, as saying that militants from the Islamic State of Iraq and the Levant (ISIL), had killed 12 fighters from rival rebel groups and at least 10 local tribesmen, including a 16-year-old.

More than 3,300 people have been killed in fighting between ISIL, most of whose fighters are foreign, and other rebels, including al Qaeda's official Syria branch, the Nusra Front.

According to the Observatory, more than 140,000 people have died in Syria's three-year-old conflict, which began as peaceful protests against four decades of Assad family.