A reporter heard helicopters firing heavy machineguns over the eastern part of the city on Tuesday for the first time in several days. 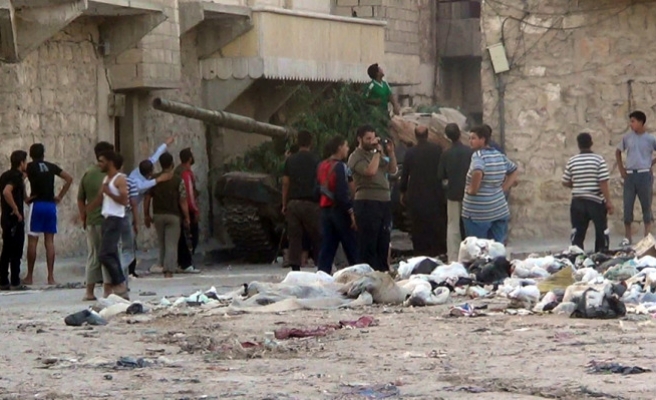 The Syrian military has stepped up its campaign to drive rebels out of Aleppo, where fighters said they were holding firm, vowing to turn the country's largest city into the "regime's grave".

Opposition activists denied a government declaration that its forces had recaptured the Salaheddine district, in southwest Aleppo, straddling the most obvious route for Syrian troop reinforcements coming from the south.

A Reuters reporter heard helicopters firing heavy machineguns over the eastern part of the city on Tuesday for the first time in several days.

Hospitals and makeshift clinics in rebel-held eastern neighbourhoods were filling up with casualties from a week of fighting in the city, a commercial hub drawn into the 16-month-long revolt against President Bashar al-Assad.

"Some days we get around 30, 40 people, not including the bodies," said a young medic in one clinic. "A few days ago we got 30 injured and maybe 20 corpses, but half of those bodies were ripped to pieces. We can't figure out who they are."

The opposition Syrian Observatory for Human Rights said more than 100 people, 73 of them civilians, were killed in Syria on Monday. It said five rebel fighters died during clashes with Syrian forces in Salaheddine.

Outgunned rebel fighters, patrolling in flat-bed trucks flying green-white-and-black "independence" flags, said they were holding out in Salaheddine despite a battering by the army's heavy weapons and helicopter gunships.

'BASHAR'S FORCES WILL BE BURIED'

"Damascus is the capital, but here we have a fourth of the country's population and the entire force of its economy. Bashar's forces will be buried here."

So far, however, the government's superiority on the ground means rebels have had little success in holding on to urban territory. The rebels made a major push into Damascus two weeks ago, but were driven out.

The Syrian government has said it has recaptured Salaheddine. Reuters journalists in Aleppo have not been able to reach the neighbourhood to verify who holds it.

The army's assault on Salaheddine echoed its tactics in Damascus earlier this month when it used its overwhelming firepower to mop up rebel fighters district by district.

Assad's forces are determined not to let go of Aleppo, where defeat would be a serious strategic and psychological blow.

Military experts say the rebels are too lightly armed and poorly commanded to overcome the army, whose artillery pounds the city at will and whose gunships control the skies.

"Yesterday they were shelling the area at a rate of two shells a minute. We couldn't move at all," a man calling himself a spokesman for the "Aleppo Revolution" said on Monday. "It's not true at all that the regime's forces are in Salaheddine."

Warfare has stilled the usual commercial bustle in this city of 2.5 million. Vegetable markets are open but few people are buying. Instead, crowds of sweating men and women wait nearly three hours to buy limited amounts of heavily subsidised bread.

In a city where loyalties have been divided, with sections of the population in favour of the Assad government, some seemed wary of speaking out in the presence of the fighters, many of whom have been drafted in from surrounding areas.

Asked about his allegiances, one man waiting at a police station that had been badly damaged by shellfire said: "We are not with anyone. We are on the side of truth."

Asked whose side that was, he replied: "Only God."

Others stopped members of the Free Syrian Army (FSA) and asked them to do something about the supply of bread and petrol.

Rebel fighters remain in control of swaths of the city, moving around those areas armed with assault rifles and dressed in items of camouflage clothing in an edgy show of confidence.

They were emboldened to strike at Aleppo and central Damascus by a July 18 explosion that killed four of Assad's top security officials.

With big powers divided, the outside world has been unable to restrain Syria's slide into civil war.

The only international military presence is a small, unarmed U.N. observer mission. A convoy carrying the head of the mission was attacked on Sunday and only the vehicles' armour prevented injuries, U.N. Secretary-General Ban Ki-moon said on Monday.

He gave no further details of the attack. U.N. officials said on condition of anonymity that the convoy of five vehicles was hit by small arms fire in Talibisa, some 17 km (10 miles) from Homs, in what they said was an opposition-held area.

Moscow has supported Assad and has shown no sign of abandoning him, blaming the West and Arab countries for stoking the revolt by backing the opposition. Russian Deputy Foreign Minister Gennady Gatilov said on Twitter: "Situation is really critical in Aleppo. It is clear that biased media by all means try to do work for the opposition when the latter fails."

France said it would ask for an urgent meeting of the U.N. Security Council to try to break the diplomatic deadlock on Syria, but gave no indication that Russia and China would end their longstanding policy of blocking measures against Assad.

In London, Syria's most senior diplomat resigned because he could no longer represent a government that committed such "violent and oppressive acts" against its own people, the British Foreign Office said. Charge d'affaires Khaled al-Ayoubi joins a growing list of senior Syrian defectors.

Amid growing concern about security on its frontier, Turkey sent at least four convoys of troops, missile batteries and armoured vehicles to the border with Syria.

There has been no indication that Turkish forces will cross the border, and the troop movements may just be precautionary in the face of the worsening violence in Syria.