Kofi Annan has called on the US and Russia, two huge powers still in disagreement over a solution to the Syrian crisis that has been continuing for more than two years, to come to a common point to end the prolonged and ever-deepening crisis in Syria. 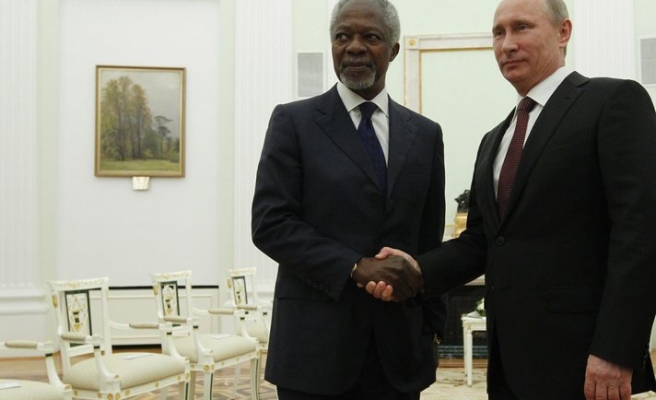 Kofi Annan, the former UN-Arab League special peace envoy for Syria, has called on the US and Russia, two huge powers still in disagreement over a solution to the Syrian crisis that has been continuing for more than two years, to come to a common point to end the prolonged and ever-deepening crisis in Syria.

“I believe President [Barack] Obama and President [Vladimir] Putin have a lot of common interest in the region and that they need to be able to come together, otherwise we are going to pay an incredible price and not just in Syria,” Annan said in the Swiss city of Caux on Friday.

Annan, who quit his post as a peace envoy to Syria last year, a fact that marked the UN Security Council's failed policy in Syria, was the author and the developer of a six-point peace plan for Syria which was intended to end the fighting and form a cease-fire in the country. The plan did not become binding as the crisis in Syria escalated into a full-fledged bloody war.

Annan said that he resigned as envoy because he was “quite disappointed with the behavior of the international community.”

Annan has always noted in his statements that he wants the international community to come together to put pressure on the embattled Syrian regime in Damascus to peacefully transfer power. However, the main powers, meaning the permanent members of the UN Security Council, could not unite behind Anna's plan, which was a new phase in the solution of the Syrian crisis, and failed to overcome their differences on Syria.

In his speech assessing the complicated circumstances of the Syrian crisis in three issues, Annan said that the first issue is the division within Syria itself.

“During the first Geneva conference, we did indicate that we need to ensure that these groups are protected and their rights are respected,” Annan underlined, adding that “honestly, if we are going to resolve the issue of Shia and Sunni, we need to get Saudi Arabia and Iran into the issue and in fact without that, the proxy war will continue.”

Stating that Saudi Arabia and Iran were not part of Geneva conference last year, Annan made it clear that Iran has to be part of the solution of the Syrian crisis saying, “It does have an influence and you cannot solve the problem without it.”

“I hope to bring them to the next Geneva conference, whether it will succeed or not,” Annan concluded.