Morsi backers staged several rallies in protest at what they describe as the "military coup". 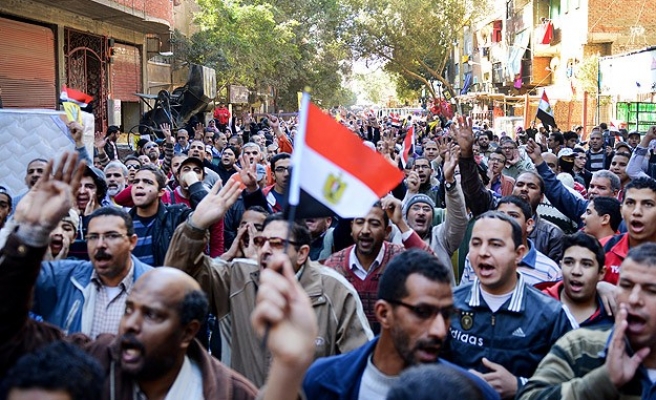 World Bulletin / News Desk
Backers of ousted president Mohamed Morsi staged several rallies Friday in protest at what they describe as the "military coup" in Egypt.

Rallies set out from several mosques in Cairo with demonstrators chanting slogans against the military.

Protesters also marched in the Giza districts of Talbiya and Mohandiseen with Morsi partisans flashing the four-fingered Rabaa sign in memory of hundreds of pro-Morsi supporters killed in the mid-August violent dispersal of their protest camp in Cairo.

Protesters burnt the US and Israeli flags during their rally in the upscale Mohandiseen district.

The rallies were also staged in the 6 October City on the outskirts of Cairo, the coastal city of Alexandria, the central provinces of Beni Sueif and Minya and the canal cities of Suez and Ismailia.

The rallies were called by the National Alliance for the Defense of Legitimacy, Morsi's main support bloc, in the run-up for the downfall of long-serving president Hosni Mubarak on February 11, 2011.

The alliance, made up of groups that demand Morsi's reinstatement, has been staging demonstrations almost on a daily basis since the army unseated Morsi on July 3 following mass protests against his rule.