Arabs League says 'attack on one is attack on all'

"Arab countries have decided to consider any military aggression on any member states as an attack on all Arab states, and agreed to activate joint defense agreements," Arab League chief Nabil al-Arabi told a news conference on Sunday. 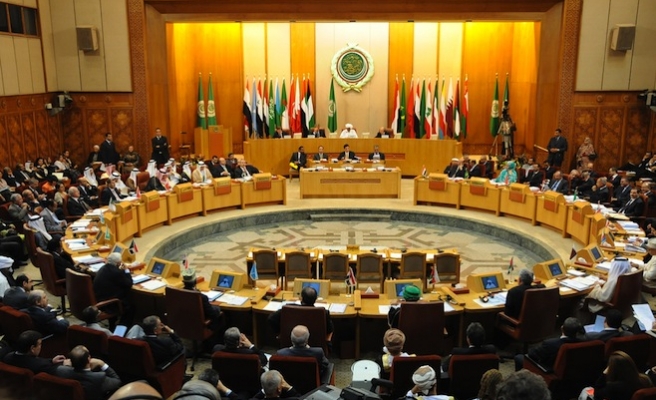 Arab foreign ministers have agreed to activate joint defense agreements to combat the menace of extremist groups, including the self-styled 'Islamic State.'

"The most important outcome of the meeting is the resolution on protecting Arab national security," Arab League chief Nabil al-Arabi told a news conference Sunday night, reading out the communiqué of a meeting that spanned for 10 hours at the pan-Arab body's Cairo headquarters.

"Arab countries have decided to consider any military aggression on any member states as an attack on all Arab states, and agreed to activate joint defense agreements," he said.

Al-Arabi asserted, however, that the foreign ministers had not taken any military decisions "but the door remains open for that."

He said the top diplomats discussed all threats to Arab national security.

"They agreed to stand up against all terrorist and extremist groups, including the Islamic State in Iraq and the Levant (ISIL), and combat their affiliations and terrorist activities in the region," he added.

In their communiqué, the ministers called for boosting cooperation among Arab League member states to combat terror and the menace of the Islamic State.

The Islamic State, formerly known as ISIL, had recently managed to capture large swathes of Iraq and Syria, triggering an international outcry.

The U.S. has conducted a total of 143 airstrikes against sites held by the militant group across Iraq since early last month.

Under the cover of U.S. aerial support, the Kurdish "Peshmerga" fighters and Iraqi government troops have made slow but steady advancements in IS-held areas.

Arab foreign ministers meeting in the Egyptian capital, Cairo, on Sunday expressed backing for a plan by Palestinian Authority President Mahmoud Abbas to get a United Nations approval on a blueprint for ending the Israeli occupation of Palestinian territories, a well-informed diplomatic source said.

The source, who asked not to be named, told Anadolu Agency that the final communiqué of the meeting of Arab foreign ministers in Cairo calls for finding a drastic solution to the Palestinian problem and ending the Israeli occupation of Palestinian territories, describing this occupation as the heart of the conflict.

The communiqué also calls on the United States and the international Quartet to put pressure on Israel to abide by its commitments and also usher in the necessary conditions for serious talks that can result in ending the Israeli occupation at the end of the day, the source added.

On Sunday, Abbas, the source said, briefed Arab foreign ministers attending the meeting at the headquarters of the Arab League about his plan to get United Nations approval on a blueprint to end Israel's occupation of Palestinian territories in the light of a specific timetable.

He added that the blueprint makes it necessary for the United States and Israel to recognize a Palestinian state within the 1967 borders, one that has East Jerusalem as its capital. It also includes a timetable for ending the Israeli occupation of Palestinian territories.

The foreign ministers attending the meeting also called for holding an international conference on the Palestinian cause, an occasion during which all aspects of this cause would be explained.

Since its establishment, Israel has continued to misappropriate Palestinian land in the West Bank – on which it continues to build numerous Jewish-only settlements – in breach of international law.