Syrian Army units established control over al-Hazm al-Gharbiya area, a strategic Point al-Raqema and Dahr al-Kharnoubi hill in the vicinity of al-Qaraytain city in the southeastern side of the central province of Homs 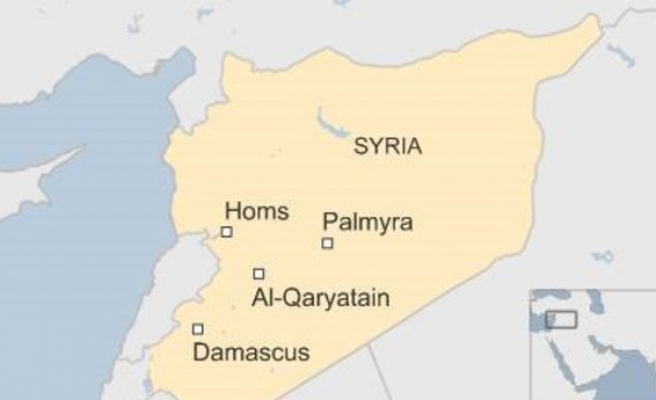 Regime troops were locked in heavy fighting Tuesday with ISIL in central Syria, where they dealt the fighters a major blow by seizing the ancient city of Palmyra.

Just two days after seizing Palmyra from IS, pro-government fighters advanced southwest towards the rebel-held town of Al-Qaryatain, the Syrian Observatory for Human Rights said..

They captured a series of strategic hilltops overlooking the town, said the Britain-based monitor, backed by "intense" air strikes by both Syrian and Russian warplanes.

State news agency SANA said the army, backed by pro-government militia, had also seized rural farmland south of Al-Qaryatain as they closed in on the town.

IS had seized the strategic town in August 2015, kidnapping at least 230 people, including dozens of Christians, and razing its famed Mar Elian monastery.

The town lies on a key road linking Palmyra with the Qalamun region of Damascus province to the west.

Sunday's capture of Palmyra, known as the "Pearl of the Desert" for its colonnaded alleyways and stunning temples, was seen as a the biggest blow so far in the war against ISIL in Syria.

Syria's government has hailed the victory as proof of its credentials in the anti-ISIL fight.

On Tuesday, Defence Minister Fahed Jassem al-Freij said the armed forces would push their offensive against IS to secure a "final victory" over the jihadists, the SANA state news agency reported.

Syria's armed forces have pledged to strengthen their hold on Palmyra and press on towards IS's northern bastion in Raqa as well as the oil-rich province of Deir Ezzor to the east.

The rebels swept into Palmyra, a UNESCO-listed World Heritage Site, in May 2015 and began a campaign to destroy tombs and shrines it considers idolatrous.

The extremist group demolished the 2,000-year-old temple of Bel and also blew up the Arch of Triumph.

Syria's head of antiquities, Maamoun Abdulkarim, told AFP that 80 percent of the site was still "in good shape" and the ancient ruins could be restored in five years with UNESCO's help.

But UN expert Annie Sartre-Fauriat, who belongs to a group of experts on Syrian heritage set up by UNESCO in 2013, said she was "very doubtful" that would be possible.

As they retreated from Palmyra at the weekend, ISIL fighters planted roadside mines near some of the most celebrated ruins of the city.

Syrian army sappers have already defused dozens of the makeshift bombs and have conducted controlled detonations of others, a military source told AFP.

Moscow began its air war in support of President Bashar al-Assad's troops in September, carrying out strikes on "terrorist" targets across the country.

Earlier this month Russia announced a drawdown but it said it would keep up its support for the regime's battle against IS and other rebel groups.

Analysts say that only 10-25 percent of Russian forces have left Syria since President Vladimir Putin announced the withdrawal.

"All the talk in the West that Russia was going to ditch Assad was nonsense," said Pavel Felgengauer, a Russian military analyst.

"We are not planning to abandon him now. Russia wants Assad to stay in power and the goal is to give him a chance to win the civil war."