Around 100 Syrians struggle to breathe after 'toxic' attack

A rebel alliance in nearby Idlib denied any involvement in the alleged attack. 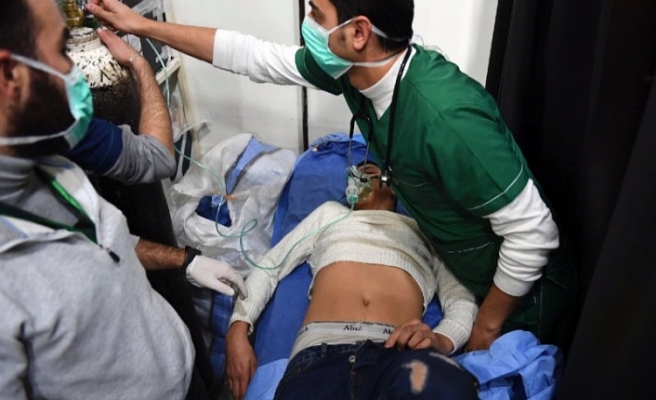 Around 100 Syrians have been hospitalised with breathing difficulties in Aleppo, state media and a monitor said Sunday, after allegations rebels fired "toxic gas" on the regime-held city the previous day.

The Syrian Observatory for Human Rights, a Britain-based monitor, said a total of 94 people were hospitalised, but most had been discharged and the 31 cases that remained were not critical.

Late Saturday, state media accused rebels of launching an attack with "toxic gas" on the northern city in what health official Ziad Hajj Taha said was a "probable" chlorine attack.

On Saturday, an AFP photographer saw men, women and children being treated at an Aleppo hospital for breathing difficulties.

Some were sitting, while others lay down, breathing through with oxygen masks.

The regime controls Aleppo city, but rebels and jihadists are present to the west of the city in the country's last major opposition bastion of Idlib.

But a rebel coalition there on Sunday denied involvement.

"We at the National Liberation Front deny the criminal, lying regime's allegations that revolutionaries targeted the city of Aleppo with any missiles and especially not any containing chlorine gas," it said.

Other groups in the area include the jihadist-dominated Hayat Tahrir al-Sham alliance and the Al-Qaeda-linked Hurras al-Deen group, neither of whom have commented on the alleged attack.

Over the course of Syria's seven-year war, international human rights groups have repeatedly accused belligerents -- especially the regime -- of carrying out chemical attacks.

The conflict has killed more than 360,000 people and displaced millions, according to the Observatory.