Dahab Hamdy gave birth while handcuffed to her hospital bed after being detained while passing by an anti-coup protest on her way to hospital. 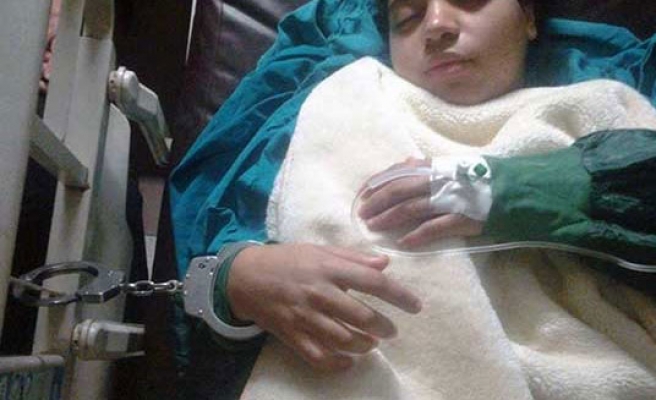 As Egyptian police cracked down on the protest, Hamdy and her friend were arrested for taking part in the protest even though they were clearly just passersby and taken to the Al-Amereya detention center. Since then, she has had her detention renewed 15 times.

When she went into labor, she was still in the detention. The authorities temporarily released her to go to hospital to give birth, but still handcuffed her to her hospital bed, and is now waiting to be taken back into detention.

According to the Middle-East Monitor, her husband appealed to a public prosecutor but is yet to get a response.

(Video of interview and translation below)

Dahab: My name is Dahab… Dahab Hamdy. I was walking in the street, and they took me [arrested me].

Interviewer: Were you taking part in a protest?

Dahab: No. I was walking, heading to a pregnancy check-up [in hospital]. They [police forces] arrested me and my friend. One young man kept telling them "she has nothing to do with [the protest]" but still they arrested me.

Interviewer: What happened after that?

Interviewer: When was that?

Interviewer: How did they treat you in the police headquarters?

Dahab: As soon I arrived at the police headquarters, I told the police officer I did nothing. He replied "be aware that you will give birth in prison. Keep silent and don’t speak."

Interviewer: How did you come to the hospital?

Dahab: The lawyer brought me here.

Interviewer: Will you return to prison?

Dahab: Yes, they will return me to prison.

Interviewer: What are you accused of?

Dahab: They accuse me of involvement in protests and riots and similar accusations.

Interviewer: How will your case proceed?

Dahab: I still have 15 days to finish, then

Interviewer: What’s your message to the decision makers in the country now?

Dahab: I hope I don’t return to the police [provisional detention] with my daughter. There is no medical care there. Here is better. That's it.

Interviewer: What did you name your baby girl?