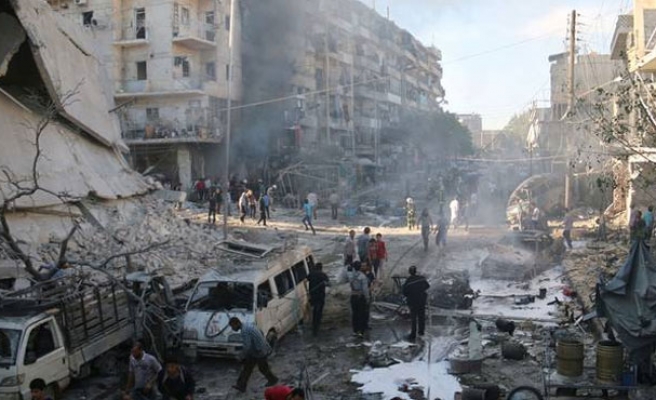 Syrian regime forces killed 48 civilians in Hardatnin village in Aleppo in northern Syria, according to a statement released Saturday by the Syrian Revolution General Commission.

Regime forces killed 48 civilians by shooting or slaughtering the victims before withdrawing from the village Friday night. The victims included women and children. The massacre was discovered when the rebels completely seized control of Hardatnin village on Saturday, according to the statement.

The revolutionaries freed 150 civilians who were captured at a school in the village.

A field hospital documented a list of the 48 victims’ names.

Mustafa Sultan, a local activist in the area, confirmed the death toll saying that regime forces backed by Hezbollah factions killed the civilians before their withdrawal.

On Friday, Nusra Front said that it seized control of the strategic area of al-Mallah strategic from regime forces. Regime forces were trying to cut the road which the opposition forces use to transfer supplies in Aleppo’s countryside using the area’s strategic position.

A report released by a group of UN experts investigating war crimes on Friday, said that "unthinkable" crimes continue to occur on a daily basis in Syria as the conflict approaches its fifth year.

The UN commission of inquiry on Syria called for urgent attention to be paid to the shocking crimes committed by the Syrian regime, Islamic State in Iraq and the Levant militants and other armed opposition groups.

The report said that Syrian President Bashar al-Assad’s regime's "surrender or starve" siege strategy has left thousands of people, particularly infants, dead over the past four years, citing the victims describing the regime's strategy as that of "draining the sea to kill the fish."

The regime has been using barrel bombs since 2012, targeting crowded areas, such as bakery lines, transportation hubs, apartment buildings, markets and aid distributions, which led to an increase in the number of persons with disabilities, according to the report.