Assad regime blamed for no headway in Syria talks

'We have not really achieved anything because of the regime and its team here,' Syrian opposition representative says in Geneva 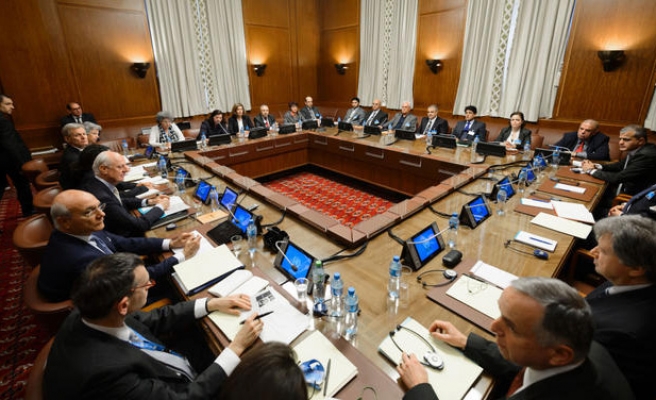 Peace talks in Geneva to resolve the Syria crisis have not made any headway because of the Syrian regime delegation, a Syrian opposition representative has said.

"We have not really achieved anything because of the regime and its team here," Salim al-Muslat, spokesman for the opposition's High Negotiations Committee, told Anadolu Agency in Geneva Thursday.

The first round of peace talks in Geneva, which started on March 14, ended without any result on Thursday. The next round is expected to start in early April.

Al-Muslat said the regime did not take the talks seriously and only wasted time in Geneva.

"Geneva is not the place to discuss Golan Heights and other issues not related to Syrian negotiations. We try to save Syrian people from barrel bombs but they want to talk about non-logical issues," he said.

"People are dying in Syria every day. Terror hits neighboring countries, Ankara, Istanbul, Brussels. This is enough! We cannot really lose lives in Syria, in Turkey and other countries," he added.

Al-Muslat said numerous Syrians are in Turkey but they have to return to Syria someday.

"Turkey opened its heart to the refugees," he said.

He also mentioned the importance of the meeting between U.S. Secretary of State John Kerry and Russian Foreign Minister Sergei Lavrov in Moscow.

"Two issues should be discussed in that meeting: the obstacles that the regime is putting against the process in Geneva and detainees [in Syria], especially women and children," he said.

Al-Muslat also said Kerry had promised to bring up the issue of detainees to the agenda in Moscow.

He said the Assad regime was holding nearly 500,000 detainees.

"If he stays, people will continue to die. Syrians do not want to see more deaths and terror. It is time to go for Assad," he said.

Last month, Russia and the U.S. agreed over a cessation-of-hostilities agreement over Syria, which paved the way for talks to resume; however, it is only valid for two weeks, according to Syrian opposition.

Since taking effect, the Assad regime, backed by Russia and Lebanon’s Hezbollah group, has been accused of continued attacks in Syria from the air and on the ground. In June 2012, the Geneva conference on Syria had called for the formation of a transitional government, maintaining a cease-fire, release of prisoners and delivering humanitarian aid to besieged areas.

Syria has been locked in a vicious civil war since early 2011 when the Assad regime cracked down on pro-democracy protests with unexpected ferocity.