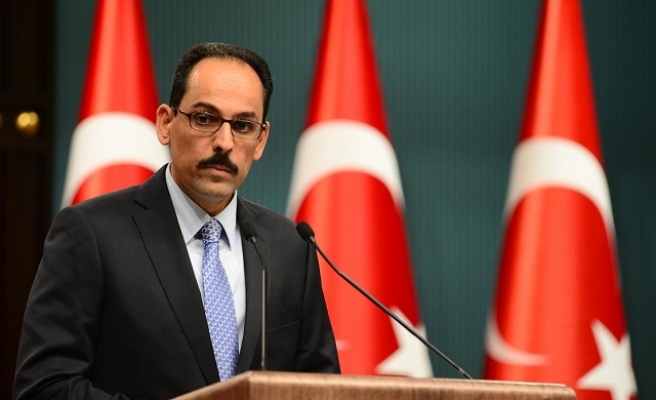 Ibrahim Kalin, the spokesman for the Turkish presidency, said Wednesday that the Syrian regime of President Bashar al-Assad and the ISIL militant group were “working together” to weaken the war-torn country’s moderate opposition.

Syria’s devastating civil war, now in its fifth year, has left some 250,000 people dead, according to UN figures, and the country divided between different heavily armed factions.

“The Assad regime and ISIL feed off each other; they benefit from each other’s barbarism,” Kalin said in an opinion article published in Thursday’s edition of Turkish newspaper Daily Sabah.

“They are working together to weaken and destroy Syria’s moderate opposition, along with any hope for a democratic and pluralistic Syria,” he wrote.

Kalin added that the Syrian regime was playing a vital role in strengthening ISIL by targeting civilians, thereby fueling support for the extremist group.

“Everyone is using ISIL to justify its policies in Syria and Iraq,” Kalin wrote. “Russia uses the group to justify its support for the Assad regime, while Iran and Hezbollah send foreign fighters on the same pretext.”

“Meanwhile, the Assad regime kills indiscriminately in the name of ‘fighting terrorism’,” he added.

In this regard, Russian warplanes on Wednesday struck several ISIL positions in Syria. According to a Russian Foreign Ministry spokesman, the strikes targeted ISIL munitions depots, vehicles and communications centers.

Shortly afterward, however, Khaled Khoja, head of the Turkey-based Syrian National Coalition, which opposes Assad, said the areas targeted by Russian warplanes had been free of any ISIL presence.

Kalin believes the Assad regime does not really seek an end to the ISIL presence in Syria. On the contrary, he asserts, ISIL serves as a tool for the Assad regime, allowing it to portray itself as fighting for “a secular Syria” against ISIL extremists.

What’s more, Kalin wrote, the existence of ISIL serves as justification for Iranian and Russian support for the regime.

“The [international] focus on ISIL allows Iran to divert attention from its support for one of the region’s most oppressive regimes,” Kalin said, adding that Iran’s ongoing support for Assad was part of its regional policy of waging “proxy wars.”

Russia, meanwhile, maintains a military presence in Syria, including a naval base in Lattakia, Kalin noted, going on to assert that the primary goal of the Russian-Iranian alliance was not so much the defeat of ISIL, “but to ensure a political outcome favorable to them.”

“Ending the conflict in Syria is crucial for resolving the refugee crisis,” Kalin wrote. “But there can be no solution without first addressing the root cause of the problem.”

The solution, he said, “lies in empowering the moderate Syrian opposition so it can lead the country’s political process, protect the Syrian people, and establish a new Syria based on rule of law, democracy, pluralism and transparency.”

The creation of “safe zones,” Kalin said, “would give the Syrian people some respite from the onslaught of the Assad regime on one hand and ISIL on the other.”