Assad says will not negotiate with armed rebels 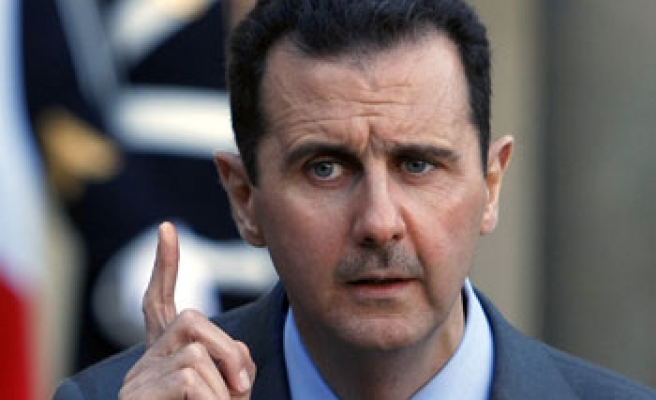 Syrian President Bashar al-Assad told a German magazine he would not negotiate with rebels until they laid down their arms, and said his most powerful ally Russia supported his government more than ever.

In an extensive interview with Der Spiegel, Assad said he did not believe it was possible to solve the conflict in Syria through negotiations with the rebels, comments that might dampen hopes among Western powers for a political solution.

"In my view, a political opposition does not carry weapons. If someone drops his weapons and wants to return to daily life, then we can discuss it," he was quoted as saying.

The Syria conflict started as a peaceful protest movement against four decades of Assad family rule but turned into a full-scale war after a government crackdown. More than 100,000 people have been killed.

The U.N. Security Council adopted a resolution last week that demands the eradication of Syria's chemical weapons and endorses a plan for a political transition in Syria.

Washington blames Assad's government for a Aug. 21 sarin nerve gas attack on a Damascus suburb that killed hundreds. The Syrian government and its ally Russia said anti-government rebels carried out the attack.

Assad told Der Spiegel that U.S. President Barack Obama had "not even a whisper of proof" that the Syrian government had used chemical weapons.

"He has nothing to offer other than lies," said Assad, contrasting Washington's stance with that of the Russians, who he viewed as "real friends".

"They understand much better what this is really about here... The Russians are much more independent than you in Europe, where you all orientate yourselves so much towards the United States."

"(Russian President Vladimir) Putin is more determined than ever to support us... He knows from his own fight against terrorism in Chechnya what we are going through here."

Assad said he was not worried about his own fate, which was why he and his family had stayed in Damascus through two and a half years of conflict, and he felt the Syrian people were rallying behind him as they saw the devastation wrought by the rebels.

He said Syria would hold presidential elections two months before his current term ends next August and he could not yet say whether he would run. "If I do not have the will of the people behind me anymore, I will not run," he added.

Assad said his government may have made errors in the severity of its initial crackdown, but he still stood by its decision to "fight terrorism, to defend our country".

Assad said the Syrian crisis had been prompted by forces outside the country, in particular al Qaeda fighters. Financial aid from Saudi Arabia and Qatar, as well as logistical aid from Turkey, was sustaining the conflict, he said.

"We have here al Qaeda with fighters from 80 countries," he said. "There are tens of thousands of fighters that we are dealing with."