The main battle is about cutting the road between Aleppo and Turkey,' Syrian president says 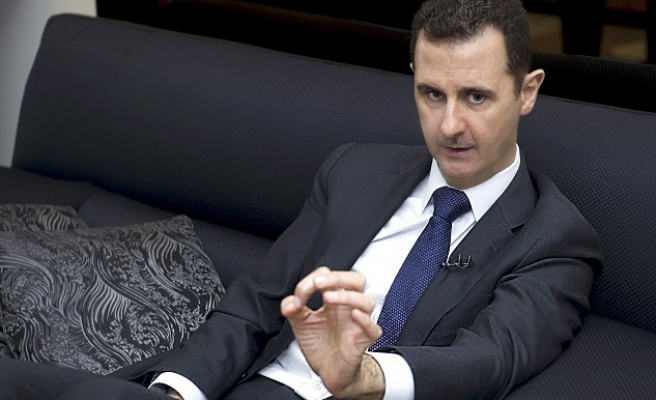 Syria's President Bashar al-Assad has vowed to retake the entire country but warned it could take a "long time," in an exclusive interview with AFP that comes as international pressure grows for a ceasefire.

Speaking at his office in Damascus on Thursday, Assad said he supported peace talks, but that negotiations do "not mean that we stop fighting terrorism".

He said a major Russian-backed government offensive under way in the northern province of Aleppo was aimed mainly at severing the opposition's supply route from Turkey.

Assad said he saw a risk that Turkey and Saudi Arabia, key backers of the opposition, would intervene militarily in Syria.

He also addressed the massive flow of refugees from his country, saying it was up to Europe to stop "giving cover to terrorists" so that Syrians could return home.

Assad said his regime's eventual goal was to retake all of Syria, large swathes of which are under the control of rebel forces or the ISIL group.

"Regardless of whether we can do that or not, this is a goal we are seeking to achieve without any hesitation," he said.

"It makes no sense for us to say that we will give up any part," he added.

Assad said it would be possible to "put an end to this problem in less than a year" if opposition supply routes from Turkey, Jordan and Iraq were cut.

But, if not, he said, "the solution will take a long time and will incur a heavy price."

The interview with Assad is the first he has given since the effective collapse of a new round of peace talks in Geneva earlier this month.

The talks are officially "paused" until February 25, and 17 nations agreed early Friday on an ambitious plan intended to bolster efforts for new negotiations.

The plan would see a cessation of hostilities implemented in as little as a week, and also demands humanitarian aid access to all of Syria.

Assad said his government has "fully believed in negotiations and in political action since the beginning of the crisis."

"However, if we negotiate, it does not mean that we stop fighting terrorism. The two tracks are inevitable in Syria."

The Aleppo offensive has been the main focus of Syrian government troops in recent weeks.

The regime has virtually encircled rebels in eastern parts of Aleppo city after severing their main supply line to the Turkish border.

"The main battle is about cutting the road between Aleppo and Turkey, for Turkey is the main conduit of supplies for the terrorists," Assad said.

The operation has raised fears of a humanitarian crisis, with tens of thousands fleeing their homes, and many flocking to the border with Turkey seeking entry.

The displaced could join a wave of more than four million Syrian refugees who have left the country since the conflict began in March 2011.

Last year, many of those refugees began seeking asylum in Europe in a major crisis that has failed to slow throughout the winter.

Assad said the blame for the influx lay at Europe's feet.

"I would like to ask every person who left Syria to come back," he said.

"They would ask 'why should I come back? Has terrorism stopped?'"

Instead, he urged Europe's governments "which have been a direct cause for the emigration of these people, by giving cover to terrorists in the beginning and through sanctions imposed on Syria, to help in making the Syrians return to their country."