Air strikes, shelling and infantry attacks on suburbs of Damascus through Sunday morning offered evidence in support of opinions from both Assad's Syrian opponents and supporters that he is again taking the fight to rebels after a lull 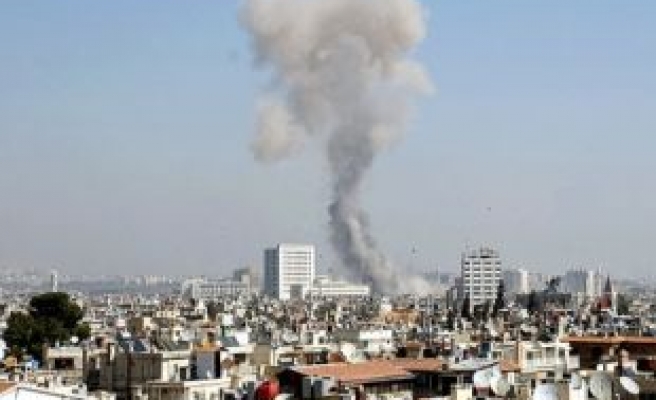 Syrian warplanes and artillery bombarded rebel suburbs of the capital on Sunday after the United States agreed to call off military action in a deal with Russia to remove President Bashar al-Assad's chemical weapons.

President Barack Obama said he may still launch U.S. strikes if Damascus fails to follow a nine-month U.N. disarmament plan drawn up by Washington and Assad's ally Moscow. But a reluctance among U.S. voters and Western allies to engage in a new Middle East war, and Russian opposition, has put any attacks on hold.

Syrian rebels, calling the international focus on poison gas a sideshow, dismissed talk the arms pact might herald peace talks and said Assad had stepped up an offensive with ordinary weaponry now that the threat of U.S. air strikes had receded.

International responses to Saturday's accord were guarded. Western governments, wary of Assad and familiar with the years frustrated U.N. weapons inspectors spent in Saddam Hussein's Iraq, noted the huge technical difficulties in destroying one of the world's biggest chemical arsenals in the midst of civil war.

Assad's key sponsor Iran hailed a U.S. retreat from "extremist behaviour" and welcomed its "rationality". Israel, worried that U.S. leniency toward Assad may encourage Tehran to develop nuclear arms, said the deal would be judged on results.

China, which like Russia opposes U.S. readiness to use force in other sovereign states, was glad of the renewed role for the United Nations Security Council, where Beijing too has a veto.

The Syrian government has formally told the United Nations it will adhere to a treaty banning chemical weapons but made no comment in the day since U.S. Secretary of State John Kerry and Russian Foreign Minister Sergei Lavrov patched over bitter differences between Washington and Moscow to set a framework for the United Nations to remove Assad's banned arsenal by mid-2014.

Air strikes, shelling and infantry attacks on suburbs of Damascus through Sunday morning offered evidence in support of opinions from both Assad's Syrian opponents and supporters that he is again taking the fight to rebels after a lull following the Aug. 21 gas attack that provoked the threat of U.S. action.

"It's a clever proposal from Russia to prevent the attacks," one Assad supporter told Reuters from the port of Tartous, site of a Russian naval base. "Russia will give us new weapons that are better than chemical weapons," he added. "We are strong enough to save our power and fight the terrorists."

An opposition activist in Damascus echoed disappointment among rebel leaders: "Helping Syrians would mean stopping the bloodshed," he said. Poison gas is estimated to have killed only hundreds of the more than 100,000 dead in a war that has also forced a third of the population to flee their homes since 2011.

The deal, suggested by Russian President Vladimir Putin, resolved a dilemma for Obama, who found Congress unwilling to back the military response he prepared following the release of sarin gas in rebel suburbs of Damascus. Obama blames Assad for some 1,400 dead civilians; Assad and Putin accuse the rebels.

Russia says it is not specifically supporting Assad - though it has provided much of his weaponry in the past. Its concern, it says, is to prevent Assad's Western and Arab enemies from imposing their will on Syria. And Moscow, like Assad, highlights the role of al Qaeda-linked Islamists among the rebel forces.

Their presence, and divisions among Assad's opponents in a war that has inflamed sectarian passions across the region, have tempered Western support for the rebels. Al Qaeda leader Ayman al-Zawahri urged followers not to work with other Syrian rebels.

The opposition Syrian National Coalition elected a moderate Islamist on Saturday as prime minister of an exile government - a move some members said was opposed by Western powers who want to see an international peace conference bring the warring sides together to produce a compromise transitional administration.

Previous attempts to revive peace efforts begun last year at Geneva have foundered on the bitter hostilities among Syrians.

Assad has just a week to begin complying with the U.S.-Russian deal by handing over a full account of his chemical arsenal. He must allow U.N.-backed inspectors from the Hague-based Organisation for the Prohibition of Chemical Weapons (OPCW) to complete their initial on-site checks by November.

Under the Geneva pact, the United States and Russia will back a U.N. enforcement mechanism. But its terms are not yet set. Russia is unlikely to support the military option that Obama said he was still ready to use: "If diplomacy fails, the United States remains prepared to act," he said on Saturday.

The Pentagon said its forces were still poised to strike.

Assad told Russian state television last week that his cooperation was dependent on an end to such threats and U.S. support for rebel fighters. It seems likely that Moscow can prevail on him to comply, at least initially, with a deal in which Putin has invested no little personal prestige.

While Lavrov stressed in Geneva that the pact did not include any automatic use of force in the event of Syria's failure to comply, Western leaders said only the credible prospect of being bombed had persuaded Assad to agree to give up weaponry which he had long denied ever having, let along using.

"It would have been impossible to obtain if there hadn't been a stick," French Foreign Minister Laurent Fabius said in Beijing. Paris had offered Obama military support against Assad.

Fabius cautioned: "This agreement is not the be all and end all. We're very cautious about it. There is all the rest that has to be solved and there must be a political solution."

Where such a political solution may come from is unclear.

Kerry and Lavrov plan to meet the U.N. envoy on Syria at the end of the month to review progress toward peace talks. Lavrov spoke of an international peace conference as early as October.

Fighting on the ground in a country divided between rebel and government forces shows little sign of slowing its descent into atrocity, with 1,000 people dying in any typical week.

Analyst Shadi Hamid of the Brookings Doha Center wrote in the Atlantic magazine: "If anything, Assad finds himself in a stronger position. Now, he can get away with nearly anything - as long as he sticks to using good old conventional weapons.

"Assad is effectively being rewarded for the use of chemical weapons," Hamid added. "He has managed to remove the threat of U.S. military action while giving very little up in return."

There was heavy fighting overnight in Jobar, a rebel-held area just east of downtown Damascus, opposition activists from the Syrian Observatory for Human Rights said on Sunday. Residents counted three air strikes on neighbouring Barzeh and there were clashes in other parts of the metropolis, too.

In the government-held centre, however, schools reopened on Sunday after the summer break and traffic was heavy - further signs the authorities see the U.S. threat has passed for now.

Lavrov and Kerry, whose personal rapport played a part in breaking some of the Cold War-era ice that has chilled relations between the world's two biggest military powers, both welcomed their agreement as a victory for diplomacy.

But Kerry warned it would not be easy: "The implementation of this framework, which will require the vigilance and the investment of the international community, and full accountability of the Assad regime, presents a hard road ahead."

Having taken the surprise decision two weeks ago to seek congressional approval for, Obama faced a dilemma when lawmakers bridled - citing doubts about the rebel cause and wariness of new entanglements after wars in Iraq and Afghanistan.

Those who back intervention blasted the deal with Moscow.

Senators John McCain and Lindsey Graham, Republican opponents of the Democrat Obama said it would give Assad months to "delay and deceive".

They added in a statement: "It requires a wilful suspension of disbelief to see this agreement as anything other than the start of a diplomatic blind alley, and the Obama administration is being led into it by Bashar Assad and Vladimir Putin."

The agreement states that a U.N. Security Council resolution should allow for regular assessments of Syria's behaviour and "in the event of non-compliance ... the UN Security Council should impose measures under Chapter VII of the UN Charter".

Chapter VII can include force but can be limited to other kinds of sanction. Lavrov said: "There is nothing said about the use of force and not about any automatic sanctions."

Senior Kerry aides involved in the talks said that the United States and Russia agreed that Syria has 1,000 tonnes of chemical agents, including nerve gas sarin and mustard gas - one of the world's largest stockpiles of such material.

But the officials said there was no agreement on how many sites must be inspected. Washington thinks it is at least 45.

One U.S. official called the task "daunting to say the least". Another noted there were "targets ... not a deadline".

The weapons are likely to be removed through a combination of destroying them in Syria and shipping some for destruction elsewhere, U.S. officials said. Russia is one possible site for destruction, but no final decisions have been made.

The OPCW's experts have never moved weapons across borders before, because of the risk and have never worked in a war zone.