At least 44,000 Palestinian refugee homes have been damaged and over 50 percent of all registered Palestine refugees in Syria are now displaced within Syria or in neighboring countries, with around 235,000 displaced inside Syria. 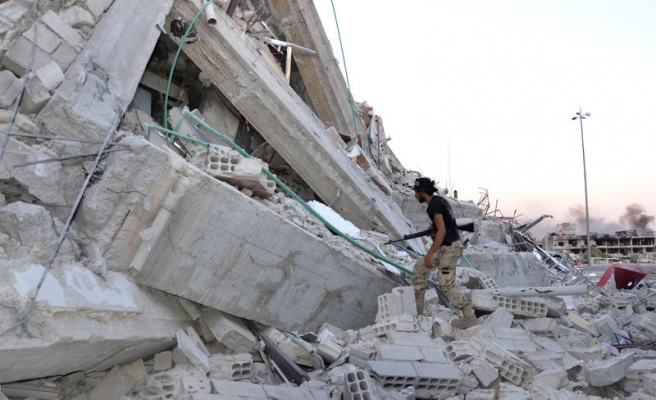 At least 44,000 Palestinian refugee homes have been damaged in Syria.

The conflict in Syria is increasingly encroaching on Palestinian refugee camps. Shelling and clashes continue to take place in and nearby several Palestinian camps across the country. Despite the considerable challenges, UNRWA is continuing to deliver emergency relief, health and education services to Palestine refugees across Syria.

Earlier in the summer, before the latest big influx of Palestinians from Syria, UNRWA in Lebanon organized rounds of cash distribution for the Palestine refugees from Syria, reaching most of the families who had fled the war in the neighboring country.

UNRWA bears most of the burden of caring for Palestinian refugee families from Syria who have moved into the already overcrowded camps in Lebanon, but budget cuts and other constraints make it impossible for the Agency to meet all the needs of the Palestinians from Syria.

The Palestine refugees in Lebanon faced a number of very specific problems already before the Palestinians from Syria started arriving. The Palestinians in Lebanon lack social and civil rights, they have no access to public social services and they have very limited access public health or educational facilities. They are also barred from many professions.

Palestinian refugees from Syria are an especially vulnerable sub-population of the Syrian conflict. The effects of statelessness multiply the horrors for Palestinians with each new war and subsequent displacement. Living in dark, cramped rooms in the Lebanese camps, these refugees from Syria have no respite from the fresh memories of the Syrian war. Their plight echoes the forced exile from Palestine that they, their parents or grandparents endured decades before.

Seventy-eight families displaced from Syria are forced to live in the makeshift Al-Bader tent camp of flimsy structures made of blankets, cardboard, pieces of wood, nylon and other gathered materials.

Diarrhea is a seasonal disease present in the tented camp and other common hygiene related health issues include scabies and head lice. If any serious contagious diseases were to break out, they would likely spread like wildfire, posing a great risk to the adjacent 70,000 persons currently residing in the overcrowded Ein el-Hilweh Palestinian refugee camp in Saida.

Reda Hamad, a young father with chronic rheumatoid arthritis and subsequent bone deformity, is living in one of the structures in the Al-Bader tent camp with his wife, two children, sister and mother.

He is looking to improve the living conditions for his family while he still can, as he believes he may not live to see next winter and he cannot bear the thought of his children still living in the tents during the cold period.

Despite the recent stricter entry controls being enforced on the border between Syria and Lebanon, Palestinians from Syria continue to arrive in Lebanon to seek assistance from UNRWA.

They wish to sit out the Syrian war in Lebanon, and they hope to return to Syria as soon as it is safe to do so. Many of them have lost their relatives, many have had their homes damaged or destroyed.

The city of Saida 40 km south of Beirut hosts Ein el-Hilweh, Lebanon's biggest Palestinian refugee camp. Many Palestinians from Syria come here. The newly arrived are queuing every day for registration at the UNRWA office. Among them is Fouzeyye Idreese, a lady who has lived through the tragic history of the Palestinians since she was a young girl during the 1948 Arab-Israeli War. She said she is now experiencing her third "Nakba" (= "the Catastrophe", when Palestinians left, fled or was expelled from their homes as a result of the 1948 Arab-Israeli War).

"This is the third Nakba that we witness. The first time was when we had to leave Palestine. I and my family went to Maroun al-Ras in Lebanon. But the people there were picking on the Palestinians. Then we escaped to Syria. There we registered as refugees. This is the third time that disaster has befallen us and has left us homeless." Fouzeyye Idreese, elderly Palestinian refugee woman says.

The Beddawi Palestinian refugee camp in Tripoli in northern Lebanon has been overcrowded since 2007 when the neighboring Nahr-el-Bared camp was destroyed in a fierce battle between the non-Palestinian Fatah Al-Islam group and the Lebanese army. Now the camp is hosting an increasing number of Palestinians from Syria.

Raida Einbatawe lives in a room without isolation or window glasses with her four children in Beddawi camp. In Syria she worked as a teacher. Since she arrived in Lebanon she has only occasionally been able to earn some money by cleaning toilets.

She lost her 12-year-old son when a missile landed close to her home in Syria. Her eldest daughter's baby son fell ill during the cold, snowy winter in Syria and died, despite Raida's attempt to bring him to hospital. Her husband is still in Syria and she is about to give up hope that he will be able to make it across the border to Lebanon and join her.

"Planes circled above us and fired at the ground, but we were just watching without being particularly scared. But one day a missile from a plane struck next to our house and I lost my 12-year-old son in that strike. My younger son injured his hand in the strike, the tendons in his hand were cut. A piece of shrapnel hit him here and came out here." Raida Einbatawe, Palestinian refugee mother said.