At U.N., Yemen accuses Iran of pursuing its destruction

The Yemeni President Abd Mansour Hadi has lashed out at Iran, accusing the country of backing the rebels to undermine a political transition in his country. 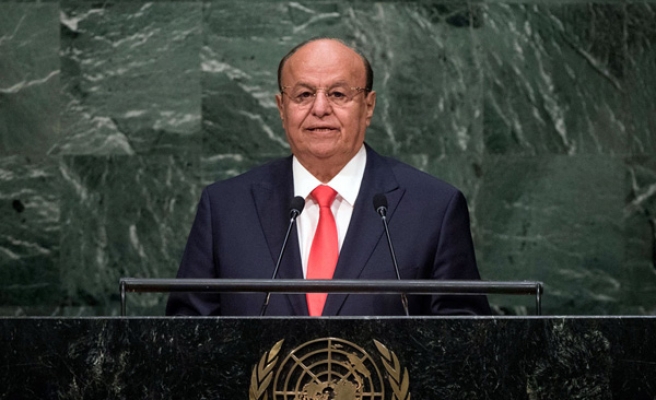 Yemen's president accused Iran on Tuesday of pursuing the destruction of his country, where government forces and a Saudi Arabia-led coalition are fighting Tehran-backed rebels.

Speaking at the United Nations, President Abd-Rabbu Mansour Hadi thanked Saudi King Salman for acting with "utter determination" by leading an air campaign by Gulf states against Houthi rebels, who seized the capital, Sanaa, a year ago.

The Houthis took over much of the country, forcing Hadi's government to flee to Riyadh, the Saudi capital. The Gulf-backed forces recaptured Aden in July before pushing north, allowing Hadi to return to his country last week.

Those forces are now preparing for a thrust against Sanaa.

"We find ourselves mixed in this battle, this fight for the country and the legitimacy of the state to ensure that the country not fall into the hands of Iran, which would like to see the destruction of the country," Hadi told the annual U.N. General Assembly gathering of world leaders.

A senior Iranian foreign ministry official said: "Iran has never interfered in any country's state matters and will never do it. We support peace and stability in the region."

The United Nations has designated Yemen as one of its highest-level humanitarian crises, placing it alongside emergencies in South Sudan, Syria and Iraq. It says more than 21 million people in Yemen need help, or about 80 percent of the population.

Yemen relies on imports, but a near-total blockade led by Saudi Arabia has slowed shipments to the Arabian Peninsula country to a trickle. The Arab coalition is inspecting shipments in a bid to thwart any arms deliveries to the Houthis.

Hadi blamed the Houthis for the humanitarian crisis.

"You are aware of the human tragedy of our people, and this is due to the blockade imposed by the militias," he said.