Egypt's new President Abdel-Fattah al-Sisi arrived in Equatorial Guinea on Wednesday to lead his country's delegation to the A.U. summit, which will kick off in Malabo on Thursday. 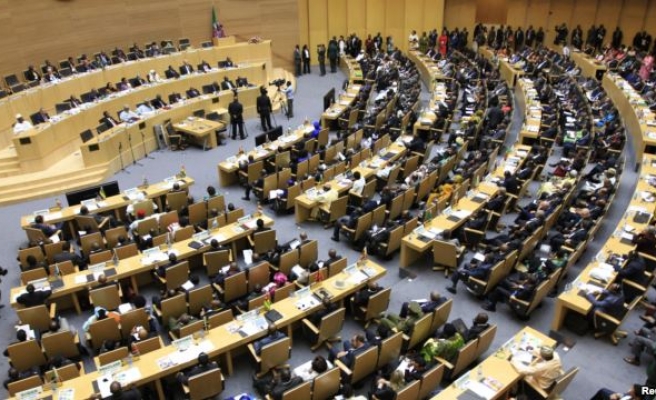 The African Union (A.U.) Peace and Security Council at the level of heads of state on Wednesday endorsed the resumption of Egypt's A.U. membership.

"The council at the level of heads of state approved the decision to readmit Egypt to the A.U.," former Djiboutian premier Dalita Mohamed Dalita said.

Dalita, a member of a high-level panel for Egypt, said he was "satisfied" by the council's decision to approve Egypt's readmission.

He said the mission of his panel had come to an end with Egypt's return to the African body, describing the decision of the Peace and Security Council to suspend Egypt as a "summer's cloud" that has been surpassed.

Dalita added that African unanimity on Egypt's return reflects the country's position in the continent.

He said Africans look forward to the contributions Egypt can make in resolving conflicts and crises in the African continent.

The council is made up of 15 member states, including five permanent member states, namely Nigeria; Uganda; Equatorial Guinea; Mozambique, and Algeria.

Uganda is the current chair of the council for June.

Egypt's new President Abdel-Fattah al-Sisi arrived in Equatorial Guinea on Wednesday to lead his country's delegation to the A.U. summit, which will kick off in Malabo on Thursday.

He described the meeting between the two leaders as the "beginning" of a new stage in relations between Egypt and Ethiopia.

"Relations between Addis Ababa and Cairo will witness a major leap in the coming period," Gebre-Christos said.

He added that a joint ministerial committee from the two countries will convene soon, whereas a public diplomacy delegation from Ethiopia will visit Egypt too.

The Ethiopian minister noted that a public diplomacy delegation from Egypt is also expected to visit Ethiopia.

Tension has marred relations between Ethiopia and Egypt in recent years over the construction of an Ethiopian hydroelectric dam on the Blue Nile.

In early June, however, al-Sisi said he would not allow the dam's construction to adversely affect his country's relations with Ethiopia or other African countries – a gesture welcomed by Addis Ababa.

Egyptian President Abdel-Fattah al-Sisi departed Algeria on Wednesday following a brief visit to the country, heading afterward to Equatorial Guinea, where he will lead Egypt's delegation to the annual African Union Summit, slated for June 26.

Algeria was al-Sisi's first foreign trip since he was sworn in as president earlier this month.

He was quoted by Algeria's official news agency as saying that his talks with Algerian officials would focus on regional developments and bilateral security coordination, particularly in regard to the fight against terrorism.

"My visit to Algeria aims to usher in genuine understanding and the formulation of a shared vision on interests, issues and challenges between Egypt and Algeria," al-Sisi said upon his arrival to the Algerian capital earlier Wednesday.

He added that his talks with Algerian officials would also tackle on the precarious situation in neighboring Libya.

Since 2011, Libya has posed a problem to neighboring Egypt, Algeria and Tunisia due to the country's deteriorating security and political situation.

They expected Egypt to sign new contracts for the import of Algerian natural gas in the days ahead.

Egypt's relations with Algeria suffered a setback in 2009 following an ill-tempered soccer match between the two countries' national teams.

Nevertheless, Bouteflika was the first head of state to congratulate al-Sisi on his presidential victory last month.