The nine-member high-level African delegation has already held talks with several Egyptian officials on the latest developments in the country. 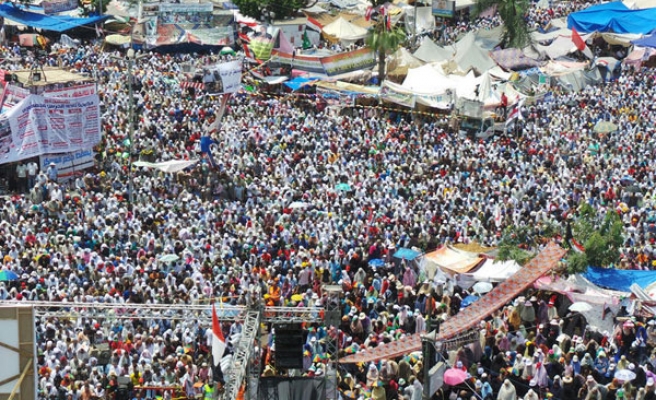 A high-level African Union delegation is expected to visit on Wednesday Rabaa al-Adawiya Square, the site of a month-long sit-in by supporters of ousted President Mohamed Morsi.

The delegation will check the site and hold talks with representatives of the protesters, Egyptian and African sources told Anadolu Agency.

The delegation was flown to Morsi's yet undisclosed detention by a military helicopter, added the source.

"The meeting was frank and transparent," Alpha Oumar Konaré, the head of the delegation, told a press conference in Cairo.

This is the second meeting between a foreign delegation and Morsi, Egypt's first democratically elected president, since he was ousted by the military on July 3.

Catherine Ashton, high representative of the EU for foreign affairs and security policy, confirmed on Tuesday that she had met Morsi for two hours late Monday.

She said the meeting with Morsi was frank, open and warm, adding that the former president had access to newspapers and television.

Morsi has not been seen in public since his ouster and his whereabouts have not been disclosed, even to his foreign visitors.

The nine-member high-level African delegation has already held talks with several Egyptian officials on the latest developments in the country.

The AU suspended Egypt’s membership following the army's removal of Morsi, in an automatic measure taken by the pan-African body following any military interruption of constitutional rule in a member state.

Egypt has sent high-level envoys to African countries to explain the latest developments in the country and demand revoking the decision.

"We want to put an end to the concept that this is about two countries fighting against each other," Alpha Oumar Konaré, the head of the delegation, told a news conference at the headquarters of the Arab League.

"Egypt is a country of tolerance. This is why it is important that all parties to the political situation here engage in dialogue," he added.

Knoare, a former Malian president and former chairperson of the African Union Commission, said they came to listen to everybody to reach an assessment of the political situation before submitting a report to the pan-African body about the political crisis in Egypt.

International demands for release of Morsi

In less than forty eight hours ousted president Mohamed Morsi met with two high-level European and African delegations, with demands from France and South Africa for his release during the same period.

The visits coincided with increasing international demands for the release of Morsi.

"We call for dialogue and for the release of president Morsi," Fabius told reporters on Tuesday.

The same demand was made also by the South African government on Tuesday.

"South Africa joins the call by the international community for the unconditional release of president Morsi and all other political prisoners held in detention since the unconstitutional change of government on July 3," said international relations spokesperson Clayson Monyela.

"The South African government calls on all relevant parties to engage in an inclusive political process that would lead to constitutional normality."