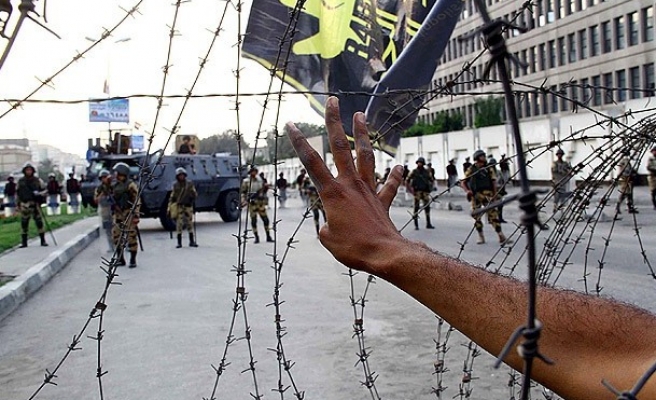 The International Rabaa Platform declared 14 August -- the day when hundreds of peaceful anti-coup protesters were massacred in Egypt in 2013 - as “the World Rabaa Day."

“We declare August 14 as the World Rabaa Day in order not to forget the Rabaa massacre and to support the pro-democracy struggle of Egyptians,” the group said in a statement on Wednesday.

The first democratically elected president in Egypt's history, Mohammed Morsi, was removed from office by a coup staged by the military led by Abdel Fattah el-Sisi on July 3, 2013.

The ouster sparked peaceful pro-democracy protests across the country in which thousands of demonstrators set up camps at al-Nahda and Rabaa al-Adawiya squares in Cairo.

On August 14, the military stormed the protest camps, killing hundreds of pro-democracy activists in what was described by Human Rights Watch as the most serious incident of mass unlawful killings in Egypt's modern history.

"In the aftermath of the coup, more than 6,000 people were killed, thousands were left injured and more than 20,000 were arrested," the International Rabaa Platform said in the statement.

“The Rabaa sign was born at the Rabaa al-Adawiya square as a freedom, democracy, justice and legitimacy symbol and within short time spread all over the world,” the statement said. “The Rabaa sign became the freedom sign of not only Egyptians but all the world’s oppressed peoples."

Made by raising four fingers with the thumb resting on the palm, the sign has come to represent civilian demonstrations protesting the ouster of Egypt's first democratically elected president and the ensuing violence that killed hundreds of people.

Rabaa means four or fourth in Arabic. Just a few hours before the massacre on August 14, anti-coup protesters in Egypt were struggling to voice their demands to the world by raising their four fingers.

The platform called on the international community and all people who believe in democracy to commemorate the Rabaa victims and to support the democratic struggle of Egyptians.

On August 14, not only Egypt’s democracy, but also the universal values of humanity were attacked, the statement said.