Barrel bombs have played a major role in fueling one the largest exodus of people since World War II, according to Khaled Koja, head of the Syrian opposition. 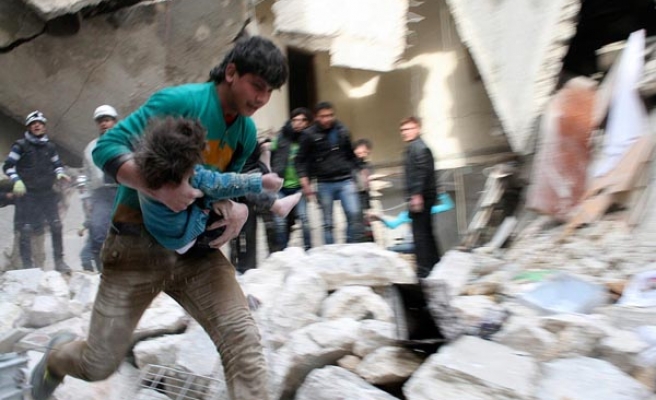 The head of Syria's main opposition National Coalition went to the United Nations Monday to urge the international community to prevent his war-torn country from turning into another Rwanda.

"What is happening in Syria is an extermination," Khaled Khoja told a news conference, in reference to barrel bombs dropped by the Syrian regime.

"Two-thirds of civilian deaths are now caused by Assad's aerial bombardment and 95 percent of everyone killed by Assad's air strikes are civilians," he said.

"It does not need to be this way. There is still time to avoid another Rwanda," said Khoja, speaking on the sidelines of the UN General Assembly in New York.

He said the first step was to impose a no-fly zone in Syria to protect civilians from air strikes.

The opposition has been demanding a no-fly zone ever since the uprising against Assad morphed into civil war, but it has never been seriously discussed by the UN Security Council, which is fraught with disagreement over what to do in Syria.

Turkey, which has opened its doors to two million Syrian refugees, has repeatedly called for a buffer zone backed by a no-fly zone for northern Syria.

"To millions of Syrians it represents hope," said Khoja. "The international community should listen."

Rights groups and Western powers say that the barrel bombings are especially deadly and indiscriminate.

Human rights groups say the bombings are one of the biggest killers in the four-year war.