According to Iraqi security sources, at least 15 rockets were fired from an area west of Baghdad called Bakriya on Thursday evening in and around Camp Liberty 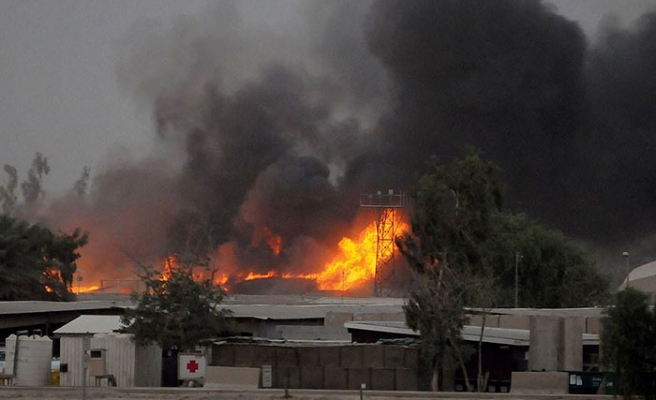 "The investigation is under way," joint operations command spokesman Yahya Rasool said of the attack, which drew condemnation from the United States and United Nations.

According to Iraqi security sources, at least 15 rockets were fired from an area west of Baghdad called Bakriya on Thursday evening in and around Camp Liberty.

The former US military base, near the international airport, houses members of the People's Mujahedin of Iran, an opposition group that has been exiled since the 1979 Islamic revolution.

The group says 80 rockets were fired, killing 23 of its members in what it described as the worst such attack since it was moved to Camp Liberty after the 2011 US troop withdrawal from Iraq.

The death toll could not be independently confirmed and Rasool said only that two members of the Iraqi security forces were wounded by the rocket fire.

An official at Yarmuk hospital in Baghdad gave a casualty toll of three dead and 18 wounded among the ranks of the dissidents, also known in Farsi as Mujahedin al-Khalq.

Rasool argued that the camp was not necessarily the only target of the attack.

"The rockets struck areas around Liberty, which was not the only place targeted," he said.

Rasool said a truck mounted with rocket launchers was found in Bakriya, north of Camp Liberty.

"The people behind this attack are terrorist criminals who want to destabilise the country," he said, without naming any group or country.

The Mujahedin said the rockets used in the attack were Katyusha and rockets dubbed Falaq which are produced by Iran.

The group sided with Saddam Hussein's Iraq during the war with Iran in the 1980s but the 2003 US-led invasion brought leaders with ties to Tehran to power.

It successfully lobbied to be removed from the US terror list but the more than 2,000 remaining dissidents at Camp Liberty are essentially stranded and demanding relocation.

"No matter the circumstances, on this point we remain absolute: the United States remains committed to assisting the UN High Commissioner for Refugees in the relocation of all Camp Hurriya residents to a permanent and safe location outside of Iraq," he said.

"This is a most deplorable act, and I am greatly concerned at the harm that has been inflicted on those living at Camp Liberty," the UN's High Commissioner for Refugees Antonio Guterres said.

"Every effort must continue to be made for the injured and to identify and bring to account those responsible."