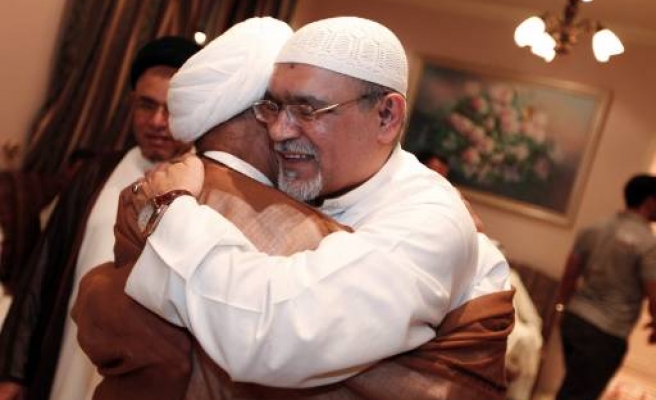 Bahrain has released a group of detainees, including two former members of parliament, charged over anti-government protests in the Gulf state earlier this year, opposition sources and state media said on Sunday.

"I saw them and embraced them," said Al-Wefaq member Sayed Hadi al-Mousawi. The bloc's MPs quit parliament after Bahrain called in troops from fellow Sunni-led kingdoms to help crush the Shi'ite-led protests in February and March.

Bahrain has sentenced eight opposition members to life imprisonment over the protests, which demanded an end to the discrimination which Bahraini Shi'ites say they face, and called for a constitutional monarchy. A few Shi'ite groups sought the monarchy's abolition.

Bahrain's state news agency quoted the public prosecutor on Sunday as saying a decision had been taken to release some detainees whose cases were transferred from a military tribunal to civilian courts for review.

It referred to the MPs, who pleaded not guilty last month to spreading false news and joining illegal gatherings, as well as to previous releases of defendants who had been detained for a period equivalent to possible jail sentences.

It did not specify how many cases might continue.

The head of an international lawyers' commission which Bahrain has asked to investigate the protests, the crackdown and its aftermath told Reuters on Thursday that he expected the release of about 150 detainees.

The commission follows a state-organised "National Dialogue" over the protests and crackdown in the kingdom, which hosts the U.S. Navy's Fifth Fleet.

That process proposed last month expanding the powers of the elected parliament, a move Bahrain's king approved while preserving the dominance of an upper house picked by his court. Opposition groups denounced the results as a farce.