In a separate ruling, 20 physicians were jailed for forcefully occupying a hospital, spreading lies and false news, withholding treatment, inciting hatred of Bahrain's rulers and calling for their overthrow. 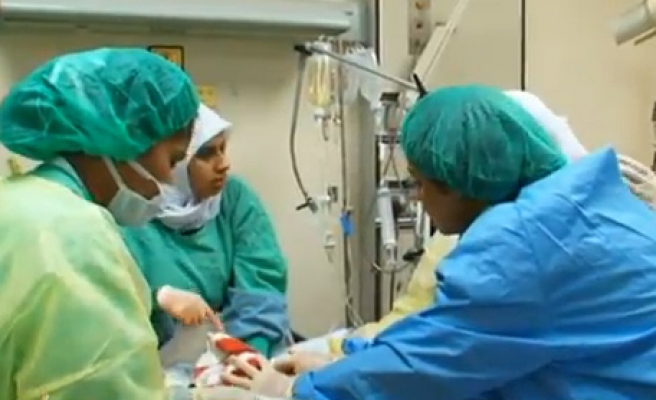 Bahrain on Thursday sentenced a man to death for running over a policeman and jailed 20 doctors for between five and 15 years for stealing medicine and stockpiling weapons during unrest in the Gulf kingdom this year, state news agency BNA said.

Ali al-Tawil was convicted of killing the policeman and of joining illegal gatherings for "terrorist goals". Another man was handed a life term for his involvement, BNA said.

Bahrain's Sunni Muslim rulers in March quashed protests led by the island's Shi'ite majority demanding an end to sectarian discrimination and a greater say in government.

At Bahrain's request, fellow Sunni neighbours Saudi Arabia and the United Arab Emirates sent troops to help halt the unrest. At least 30 people were killed, hundreds wounded and more than 1,000 detained -- mostly Shi'ites -- in the crackdown.

In a separate ruling, 20 physicians were jailed for forcefully occupying a hospital, spreading lies and false news, withholding treatment, inciting hatred of Bahrain's rulers and calling for their overthrow.

The doctors have repeatedly denied the charges, which they say were cooked up by the authorities to punish medical staff for treating people who took part in anti-government protests.

Ten of them, including senior physician Ali Al-Ekri, were given 15-year terms, two were sentenced to 10 years in prison and the rest to five.

The Bahrain Society for Human Rights issued a statement expressing deep concern at the "harsh" sentences.