Some of the men were tried in absentia, said activist Mohammed al-Maskati. It was not clear how many of them were actually jailed. 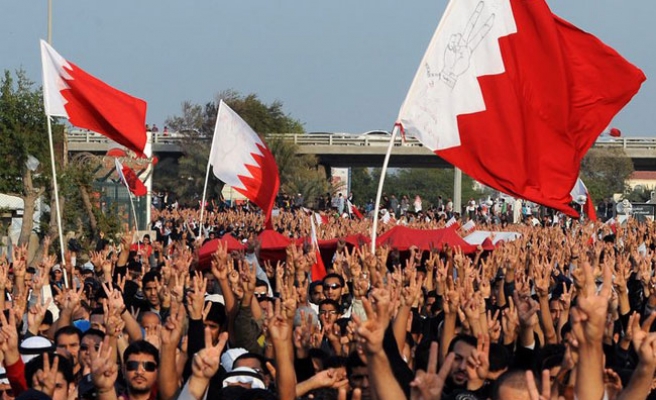 A Bahraini court has sentenced 12 men to life in prison for spying, receiving training from Iran's Revolutionary Guard and processing weapons and explosives, a defence lawyer and rights activist said on Tuesday.

Bahrain accuses Iran of fuelling unrest in the country since a 2011 uprising led by the Shi'ite Muslim community demanding reforms and more share in running the kingdom ruled by the Sunni Muslim al-Khalifa dynasty.

Tehran denies the accusation, but defends the cause of Bahrain's Shi'ite opposition.

Attorney Fatima al-Adraj said the court convicted the men on Sunday, and sentenced two others to 15 years.

Some of the men were tried in absentia, said activist Mohammed al-Maskati. It was not clear how many of them were actually jailed.

Last year, Bahrain, which hosts the U.S. Fifth Fleet, accused Iran's Revolutionary Guard of setting up a "terrorist" cell that planned to attack its airport and government buildings.

Separately, the public prosecution charged eight men with being part of a terrorist group, state news agency BNA reported. The charges follow the killing of three policemen by a bomb on March 3 during a protest in a Shi'ite village.

The charges include setting up a group that makes and uses explosives "targeting police members with the intention of killing them for the purpose of sowing chaos and sedition, and weakening state institutions to make them fail," public prosecutor Hussein Albouali was quoted as saying.

Although the government quelled the 2011 revolt, unrest persists and on Tuesday, hundreds of Bahrainis clashed with police after the funeral of two men who were killed in a car explosion over the weekend, a Reuters witness said.

As the funeral ended in al-Maqshaa' village, outside of the capital Manama, some youths threw stones and petrol bombs at the police, who fired teargas. No one was wounded and the gathering dispersed shortly after that, the witness said.